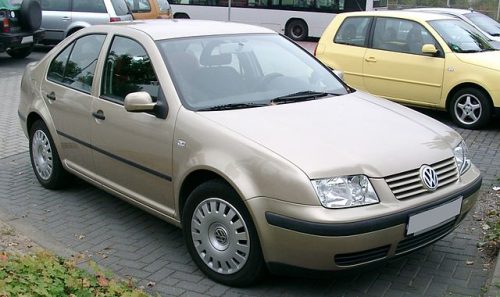 The Volkswagen Bora sedan debut took place in the spring of 1998. The name of the car translated from the Italian means “cold wind blowing from the mainland to the Adriatic in winter”. The model starts to be launched in 1999. In the US market, the car was called the Volkswagen Jetta IV.

In 2004, the production of Volkswagen Bora Variant was discontinued.

In 2005, the production of Volkswagen Bora has stopped in Europe. Jetta V. But in other countries this model continues to be manufactured under the name Volkswagen Jetta IV.

The car is built on the platform of the Golf IV, but apparently little resembles the familiar hatchback Golf elements of the new design of the front. Volkswagen Bora has broken the hatchback Golf on 230 mm: the length of a 5-seater car – 4380 mm. At 220 mm, the extended rear hangs, which increased the useful luggage space to 455 l. Significant changes in the model occurred not only in the rear, but also in the front of the car, for example, headlights, hood, wings, radiator lining, not to mention bumpers. The design of Bora differs severity. The long-term preservation of the car is provided by a zinc-zinc body. The warranty period for cross-corrosion is 12 years.

Sedans intended for the European market can be equipped with seven variants of engines: five gasoline and two turbodiesels. Turbodiesels have the same volume – 1.9 liters, but different inflation pressure and, accordingly, power: 90 and 115 bhp.

The range of petrol engines includes:

In addition to the base model, there are three performances in which Bora looks even more comfortable and attractive: Comfortline, Highline and Trendline.

The Bora Comfortline is a car of high comfort. In the back of the front seats are adjustable lumbar supports, which reduce fatigue in a distant road. Electric windshield wipers. Exterior mirrors – with heating and synchronized electric adjustments. Lunch steering wheel and lever arms are leather-coated. From the technical research, a rain sensor is offered.

Bora Highline is an option for the most demanding buyers. The exterior of the car is distinguished by the Le Castellet alloy wheels, low profile tires of the 205th dimension, fog lamps and valuable timber inserts in the handle of the door handles and the middle console. In interior trim of the salon it is worthwhile to allocate an onboard computer, radio control with a central lock, the security alarm system, an electric hatch.

Great importance is given to active security. Therefore, for example, in case of emergency braking, the control of the car is assisted by the ABS with the function of the electronic distributive of the braking forces. In addition, in the complete set with almost any of the proposed engines, at the request of the buyer put the automatic exchange rate stability. The sensors of this system continuously monitor the behavior of the car on the road. If Bora falls into a critical situation due to excessive or insufficient turning, the automatic will slow down the corresponding wheels. This will prevent the front or rear axle from being inserted and will provide the course stability of the car.

The carcass is further enhanced in the most important places. In the event of an accident, the main part of the impact energy is absorbed by the longitudinal bars of the frame, and the interior remains almost entire. Two front inflatable pillows and pyrotechnic emergency tensioners for front seat belts were also serially tested.

On the folding back of the rear seat there was an additional safety measure, the locks of the back are locked with the key so that at the parking place the thieves could not break the glass, breaking through the trunk from the cabin. And outside the luggage compartment cover is unlocked with the help of an electric lock – not a mechanical key, but by pressing a button hidden from dirt under a rubber gasket.

In addition to the front-wheel drive and all-wheel drive versions, which had the designation 4Motion. All-wheel drive improves driveability on wet and slippery and snow-covered roads.

One thought on “Volkswagen Bora PDF Workshop and Repair manuals”