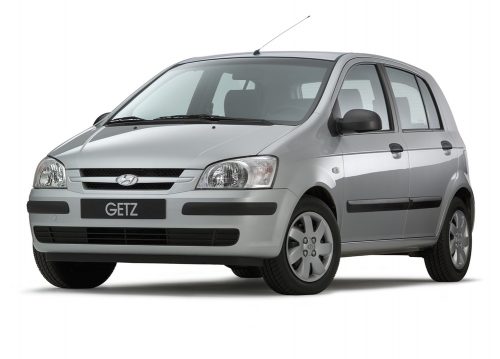 Hyundai Getz is a subcompact car manufactured by Hyundai Motor Company from 2002 to 2011. The car was presented at the Geneva Motor Show in 2002. In the same year the car went on sale.

In 2005, the model was restyled, after which it was called GETZ II. The appearance of the car has undergone a change, in particular: the shape of the headlights and rear lights, the radiator grille, the appearance of the bumpers, the engine subframe, the exhaust system has been updated. The interior also changed: the shape of the steering wheel changed, the dashboard, the center console, the electrical part. The basic equipment became poorer: the rear electric lifts were replaced by manual ones, the illumination of the buttons of the glass lifters was removed, a lamp “temperature indicator of the engine was made, but a multi-rudder was added.” The plastic has become cheaper, as does the upholstery of the seats. New color schemes of interior trim, as well as rear disc brakes, are available.

In a very limited number was released the party Getz Cross. It features increased ground clearance, plastic arches and bumpers. It was mainly sold in Europe.

One thought on “Hyundai Getz PDF Workshop and Repair manuals”