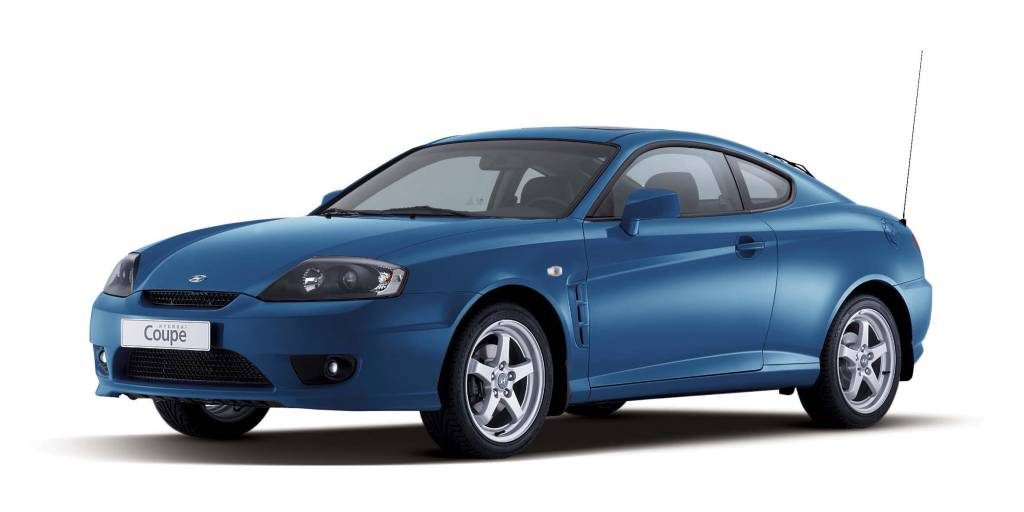 Hyundai Coupe – the car in a body a three-door liftback of the Korean company Hyundai Motor. Produced from 1996 to 2009. Known by the brands: Tiburon (in translation from the Spanish “shark”) in North America, Australia, Austria, New Zealand, Tuscani or Turbulence in South Korea, and Coupe in Europe and Russia.

The first show of the Hyundai Tiburon sports coupe took place at the Geneva Motor Show in March 1996. At the end of 1999, the model was seriously updated. In the following, the design of the car survived three more facelifts (2002, 2005, 2007). The car was created specifically for the US market, so the focus was on catchy design and affordable price (the latter was achieved by cutting the option available for “european” and reduced quality of finishing materials interior). Steady demand for the model provided a low price and promotion in the video games series Need For Speed.

The Hyundai Coupe in this body first came off the assembly line in late 1996 and was available for sale in several countries with 1.6 and 1.8 liter engines. In the United States, Tiburon was first proposed to buyers in 1997. The car was equipped with an engine from another model Hyundai – Elantra. (1.8L version produced power of 130 hp (97 kW)).

The following models, which received the FX prefix, were equipped with two-liter four-cylinder engines, the power of which was already 140 hp. (104 kW). The acceleration dynamics of this motor due to the low weight of the car (only about 1150 kg.) Was pretty decent – 8.3 s to 100 km / h.

Since 1998, the “Tiburons” have stopped putting the old 1.8 liters. engines, giving to both versions of models the updated 2-liter engine. Versions of Tiburon were made in the period from 1996 to 2002. are also known as “RC” Tiburon. There were various options, with or without ABS, 2 airbags, leather, a sunroof.

The magazine Auto, Motor und Sport in 1996 on its pages said that the suspension of the “Tiburon” and the design of the body were developed and assembled together with experts from Porsche. The magazine described the result of the works as “the best combination of comfort, traction and the feeling of sportiness among cars of this class.

The previous generation Hyundai Coupe was removed from the assembly line after the end of 2002. In 2003, Hyundai updated the appearance of the Coupe. Overall dimensions of the body became larger, a v-shaped “six” (V6) was added to the engine line. 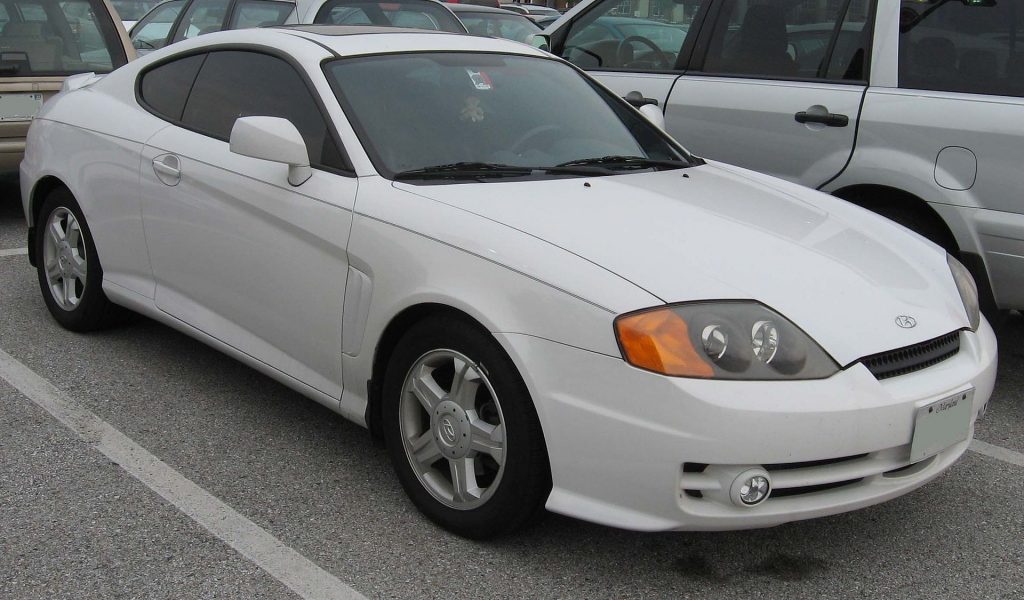 Hyundai Coupe of the 2004 model year

The wheelbase and overall length slightly increased compared to the previous version, increasing its own weight by 91 kg. In the basic configuration, the cars came with front airbags. Range of engines: 2-liter with four cylinders, 138 liters. with., and also 2,7-liter V6 with which were equipped “Sonatas” and “Santa Fe” – 178 hp. from.

The five-speed manual transmission was standard, while the four-speed automatic was an option. In addition, the luxury version of the GT V6 was equipped with a six-speed mechanics. The base models and models of the GT V6 with the automatic box were equipped with 16-inch tires, while the 6-speed “mechanics” for the GT were always equipped with 17-inch wheels. In the US, for the GT V6 version, the leather interior was the standard, as was the rear spoiler. Versions GT V6 with 6-st MKPP externally it was possible to distinguish on a high spoiler on a luggage carrier, and also the handle of a gear change increased in length. The hatch and aluminum pedals have always been optional.

A well-known transmission about Top Gear cars in its comparative test of Hyundai Coupe and Lexus CS 430 gave preference to a Korean car that received the leading characteristics such as “a beautiful car”, “an excellent road-keeping chassis” and “an auto that does not drive for its own price tag, but just gives an excellent drive! “.

For the GT V6, which was positioned as a luxury version of the Coupe / Tiburon / Tuscani in the US, a special version was also released. It could be distinguished on the “Special Edition” badge under the symbol “Tiburon”, the new upholstery, the stereo system from “Kenwood”, the red calipers in the front and the multimeter on the “torpedo”.

This version was completed with only 6-speed manual or automatic boxes. Colors: Jet Black, Rally Red, Sunburst Yellow. The new design was highly appreciated by automotive journalists, and some of them compared it to the Ferrari 456.

In 2005, the company introduced another facelift model. Cosmetic changes touched the front and rear bumpers, as well as optics. The front bumper received figured scraps under the hood cover and at the bottom with plastic mesh inserts, which gave a more aggressive and stylish look to the front of the car. The rear bumper got decorative smelting under the number plate. The tail lights became two-colored. The main red part with a one-lamp arrangement was supplemented by a white petal – a turn signal. The front optics lost the glossy molding and, together with the dark gray glass, was stylized as a “smoke”. Yellow turn signals removed.

Among the owners of the previous body of the model, the “toning” of headlights, giving them a kind of restyling, was almost a mass phenomenon. Combined seats with leather inserts were standard. To this list was added a bifurcated exhaust and a six-speed gearbox for the V6 model. The two-liter BetaII engine replaced the previous version of Beta and was equipped with CVVT technology, now delivering 143 hp instead of 134 hp.

In 2006, designers also released a new color for the new body, which complemented the lineup of existing ones. The color was called “Regatta blue metallic” and was intermediate between “Tidal Wave blue” and “Midnight blue”.

Over the last facelift for the model, the designers worked hard. Changes have touched optics, bumpers, as well as interior. The front grill got a horizontal design of the slots and lateral stamping. The headlights became teardrop-shaped, settled on a much larger area compared to the previous Coupe model. The rear optics was seriously redesigned and turned out to be modern and interesting. The rear bumper curved and received oval slits under the exhaust system. There are new side-turn indicators in the form of a circle. In the cabin, the instruments and front panel design were updated. All these changes made the car relevant.

In the spring of 2009, the sale of the successor to the Hyundai Coupe, the Hyundai Genesis Coupe, shown at the New York Auto Show, begins in the North American market.