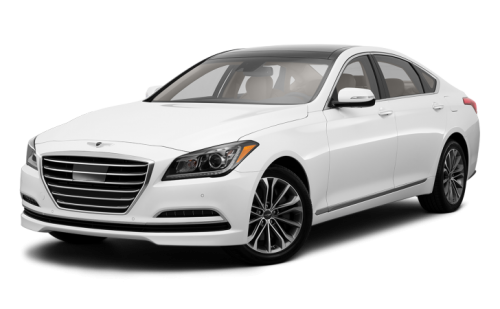 Hyundai Genesis is a business class car that has been produced by Hyundai Motor since 2008. The model is sold all over the world and is labeled by the company as a “premium sport sedan”. On the basis of the sedan, a coupe was also created, which was also presented at the Auto Show in New York, but in 2008. Since 2014, the second generation of Genesis is being manufactured.

In 2016, the second generation of the car was restyled and sold under the new Genesis brand.

In early 2017, the model Hyundai Genesis was withdrawn from production in connection with the advent of the Genesis G80.

It was shown for the first time at the Auto Show in New York in 2007.

Genesis second generation was shown in January 2014 at the Auto Show in Detroit. In addition to standard systems, it has a projection screen, a system for monitoring air quality, a 9.2-inch display, and a new HTRAC (Hyundai Traction) all-wheel drive system that independently controls the thrust between the axles and has a sporty mode.

The first images of the Genesis of the new generation in camouflage were made at the end of 2012. Then there was information about the engines. Before the North American Motor Show in 2013, Hyundai reported a prototype of the future sedan and showed teasers. A few days later, the car showcased the concept car HCD-14, at which the company demonstrated the possible future of the Genesis sedan. In October 2013, there were pictures of the finished car, as well as information about the new all-wheel drive system HTRAC. A month later, a test car was seen on the northern loop in Nürburg. A month before the show, the official information about the new car was given at the auto show.