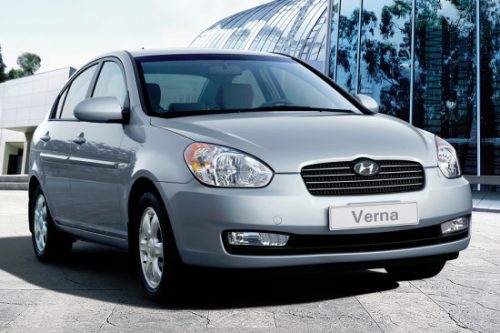 Debuting in 1999, the second generation Hyundai Accent car in the Korean market was named Hyundai Verna. Machines were equipped with gasoline engines in volume of 1,3 and 1,5 liters.

The second generation of the Hyundai Verna (aka Accent of the third generation) car started to be made in 2005 with sedan bodies and a three-door hatchback. The car was equipped with gasoline engines 1.4 and 1.6, respectively, 94 and 110 liters. with., and also 108-strong turbodiesel in volume of 1,5 liters. In the Russian market, the Verna sedan was officially sold in 2007-2008 in parallel with the Taganrog Accent.

Hyundai Verna of the third generation was produced in China and India from 2010 to 2017. In Russia this model was known under the name “Solaris“, and in other countries – as “Accent”.

The fourth generation Hyundai Verna model is sold in the markets of China and India. In Russia this car is known as Hyundai Solaris.

The Chinese “Verna”, which is produced in this country since 2016, is slightly different in design from the Russian “Solaris”. In this model there is not only a sedan, but also a five-door hatchback. Cars are equipped with gasoline engines 1.4 (100 hp) and 1.6 (123 hp.) In combination with six-speed gearboxes, mechanical or automatic. Prices for Hyundai Verna start at 72,800 yuan (about 11 thousand dollars).

Sedans are also produced in India, at a factory in the city of Chennai. Here, “Verna” is available with a 1.6-liter gasoline engine, as well as a diesel engine of the same size, developing 128 forces.