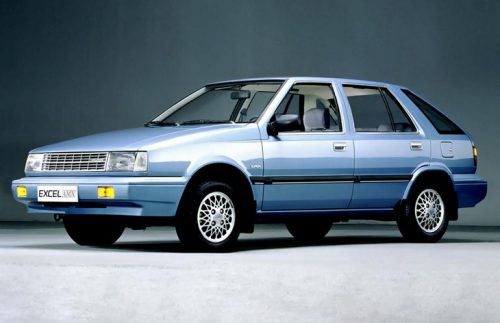 Hyundai Excel, which came in 1985 to replace the outdated model Pony, was the first front-drive Hyundai and the first Hyundai in the US market. In Europe, this car was sold under the old name Pony. The author of Excel Exterior was the famous Italian designer Giorgetto Giugiaro.

Hyundai Excel was produced with hatchback bodies (three- and five-door) and a sedan that was sold in Korea as Hyundai Presto. The car was equipped with engines in volume 1,3 and 1,5 liters, worked in pair with a mechanical transmission or with three-step “automatic machine”.

In 1987, Mitsubishi began selling the Excel model in the US under the name Mitsubishi Precis. In 1990, on the same platform, the Hyundai Scoupe coupe was created.

In 1989, the second generation of cars started to go off the production line in the Korean Ulsan. Under the hood they had the same engines of 1.3 or 1.5, but the optional “automatic” was four-stage.

Hyundai Excel was replaced by the Accent model in 1994, but the assembly of this model continued in the Philippines (until 1998).