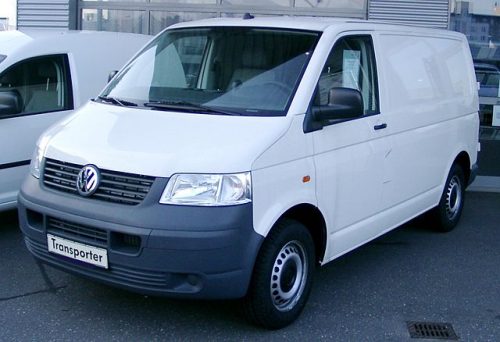 Volkswagen Transporter – the first minivan and the second civil car Volkswagen after Volkswagen Käfer. Minibus, which became one of the most recognizable symbols of the hippy era.

T5 is produced since 2003. Like its predecessor, the T4, the T5 has a front-wheel configuration with a transverse engine arrangement. The shift knob in it shifted to the dashboard. More expensive models (Caravelle, Multivan, California) differ from the ordinary Transporter with chrome strips on the body. In T5 for the first time applied a number of technical innovations: all diesel engines are now equipped with a pump injector, direct injection and turbocharger. Models equipped with five- and six-cylinder engines are equipped with an automatic transmission and an all-wheel drive. T5 is produced in Hanover (Germany), Poznan (Poland) and Kaluga (Russia).

T5 – the first Transporter, which is not exported to the US. This led to a sharp increase in sales of T4 balances. As a substitute, Volkswagen Routan is positioned in the American market for transporters.

The most luxurious version of T5 is Multivan Business. In Germany, it costs about 120,000 euros. Its standard equipment includes bi-xenon headlights, GPS navigation system, automatic climate control, electric sliding doors, a refrigerator, a table in the center of the salon, a variety of entertainment systems, etc.

Since mid-2007 Multivan with an extended wheelbase is offered: 5.29 meters.

In 2010 the car was modernized. The lights, interior, hood, front fenders, bumpers, side mirrors and radiator grille have changed. Completely changed the range of motors, all engines are produced in volume 2.0 2.5 liters in gasoline and diesel versions, with a different number of l. with., due to the firmware and turbo. For the first time, a bi-turbo system appeared on minibuses. In general, the modernization was carried out to fit the car to the new corporate style of the company.