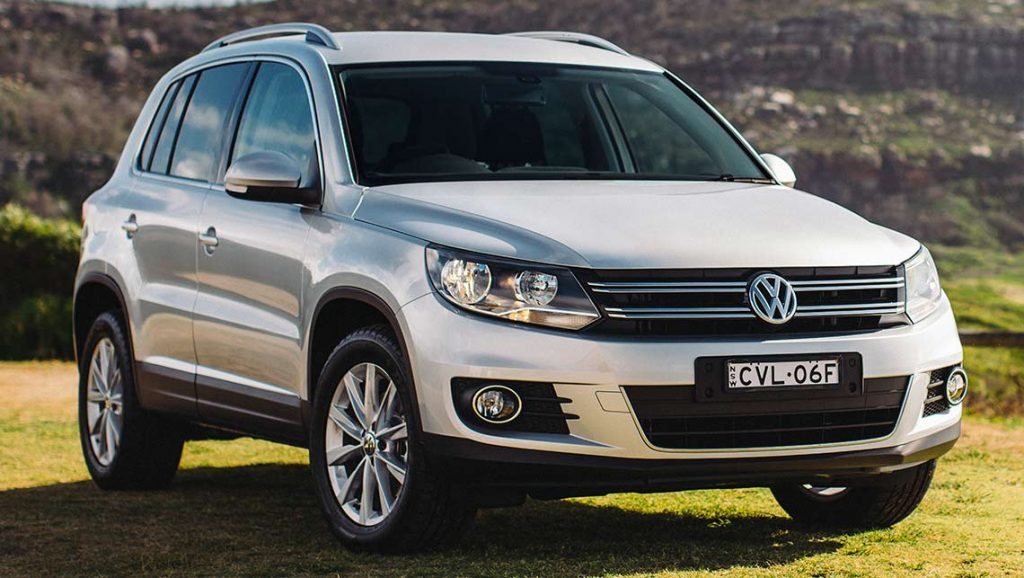 Volkswagen Tiguan – compact crossover company Volkswagen, produced since 2007. It is built on the platform of Volkswagen Golf Plus. The car is assembled at Volkswagen plants in Wolfsburg, Germany and Kaluga, Russia.

The car was introduced in 2007 at the Frankfurt Motor Show, in the same year at the motor show in Shanghai Volkswagen introduced Tiguan HY Motion on hydrogen fuel cells.

In July 2011, Tiguan went through restyling. In general, Tiguan led to a new corporate style of Volkswagen, among other changes: the radiator grille, front lights and tail lights were changed. From the technical side, the engines have changed. A new level of finishing the Track & Style has been added.

The car was produced both with a drive on the front axle, and with a four-wheel drive. Engines (installed in the Russian Federation) – 1.4 TSI (mechanical supercharger + turbocharger – 150 hp and without a mechanical supercharger with a turbocharger – 122 hp), 2.0 TSI (turbo 170 hp and 200 hp .) and 2.0 TDI (140 hp). In both cases, the Haldex coupling is responsible for the connection of the rear wheels, providing a four-wheel drive with a variable ratio.

September 2, 2015 in the European market started preliminary sales of Volkswagen Tiguan second generation, which was presented at the Frankfurt Motor Show September 15, 2015. In November 2016, the production of cars for the Russian market began at the Volkswagen plant in Kaluga. There are also sports modifications GTE and R-Line.

In March 2017, the production of VW Tiguan for the Indian market started in Aurangabad. The main difference between the version assembled in Kaluga was the presence of a 6-speed automatic transmission (AISIN) in addition to the already installed DSG and manual transmission.

In the summer of 2016 there were photos of the seven-seat version. The 7-seat version features a wheelbase stretched to 2,681 mm (+110 mm) and a longer rear overhang. The crossover has the names Tiguan LBW (Long Whell Base), L and Allspace (formerly called XL), is part of the expansion plan for the Volkswagen crossover range. At the same time, crossovers were planned on the basis of VW Polo and VW Golf and a new model called Teramont, and the third generation of VW Touareg. The official premiere of the seven-seater version was held in 2017 at the Auto Show in Detroit, and in March – at the Geneva Motor Show for the European market. In Russia, Allspase will not be supplied due to low demand for 7-seater cars in Russia.