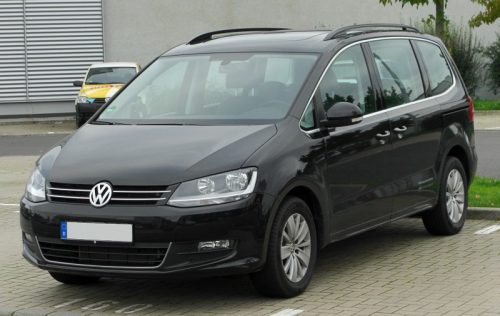 Volkswagen Sharan – minivan, which is produced by the German automaker Volkswagen since 1995. During the release, the first restyling underwent a transformation at the turn of the millennium, the second – at the end of 2003. The total output of the first generation exceeded 250,000 cars. The second generation of the car was launched in 2010.

The joint venture project Volkswagen Sharan / Ford Galaxy was launched in 1991. Both automakers planned to occupy the segment of multi-purpose vehicles in Europe. In 1994, the plans of this project Volkswagen Group and Ford of Europe were disclosed and in early 1995, production began at the Autoeuropa plant in Palmela, Portugal.

The original Sharan was put into production in 1995. Five variants of engines were available:

In 1996, Volkswagen produced a badge-engineering version and sold it under the name SEAT Alhambra with Sharan. Each of the three models of minivans had its subtle features of appearance [the source is not listed 373 days], and the Ford Galaxy is also in the interior design.

Sharan first generation was sold in Europe, South Africa and some countries in Latin America and the Asia-Pacific region. In Mexico, it was available with a 1.8L Turbo 4 cil engine with 150 hp. with a 5-speed Tiptronic gearbox, only in the Comfortline version, while in Argentina it is available with a 1.8 L Turbo 4 cil engine and 1.9 L TDI 4 cil 115 hp engine. with a 5-speed manual and 5-speed automatic transmission Tiptronic, only in the Trendline version.

Sharan’s first generation was not sold in the United States and Canada, first in accordance with the agreement between Ford and Volkswagen, in order to avoid rivalry with the Aerostar minivan. Volkswagen did not dare to bring Sharan to the North American market, suspended the development of the concept of Volkswagen Microbus and in return introduced the redesign of the minivans Chrysler-Routan.

Volkswagen Sharan and SEAT Alhambra continued to produce in Palmela, together with the Volkswagen Eos and the new Scirocco until 2010, when a second-generation minivan went into production.

In recent years, the release of the first-generation Sharan has been offered with nine engine options: