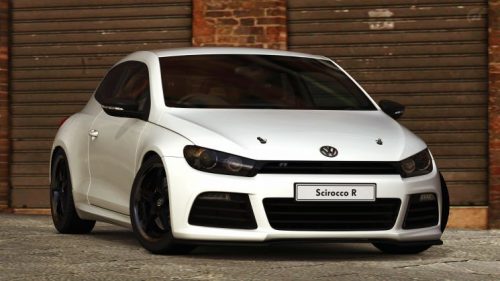 Volkswagen Scirocco – sports compact hatchback, created in 1974 instead of Volkswagen Karmann-Ghia. It was produced in 1974-1992. and since the model was very successful and helped strengthen the reputation of Volkswagen, it was decided to release a third generation in August 2008. At the moment the car is not produced.

Work on the car was started in the early 1970s as a replacement for the aging Karmann Ghia coupe with the designated internal number Typ 53. The basis for the new Scirocco was the Golf and Jetta platforms, with almost all the elements of the car being modernized in favor of a sporty design modeled Giorgetto Giugiaro. The car was more smooth and sporty than any Golf or Jetta. The launch of the Scirocco in production took place six months before the Golf, in order to solve the problems encountered before the production of large volumes of the hatchback. Scirocco went on sale in Europe in 1974, and in North America in 1975.

Models Mark I had a four-cylinder engine with a range of volumes from 1.1 to 1.6 liters for Europe and 1.7 liters for North America. All US cars of the 1975-1978 model year had an engine with one upper camshaft and two valves per cylinder, the gearbox was 4-speed, and for the USA cars of the 1979 model year were equipped with a 5-speed manual gearbox. Scirocco with automatic transmission was a rarity.

Changes in the car for Europe by 1982, after which it was replaced by Mark 2, were minor. The modernization of the air conditioner has been available, which has been installed as an option since August 1975, and at the suggestion of existing owners – installation of a larger capacity battery.

In the course of production, Mark I introduced small changes in the bodywork and finishing. In 1977 (and on some cars in 1976), system changes were made to the windshield wipers: the usual two replaced by a single wiper, which was installed from the passenger side of the windshield. In 1978, the front turn signal was changed from “flat”, visible only from the front, to “curved” to the front wing, which is visible from the side. Other changes in the life of the car include chrome bumpers and the presence of rubberized end caps or bumpers with fully-wrapped plastic. In 1979, the style of exterior mirrors changed and they were installed from the driver’s and passenger’s side. There were also special versions of Mark I throughout the production time. Most of the differences are associated with color gamut and trim. Special versions have their names: “Sidewinder”, “Sidewinder II”, “Champagne Edition”, “Champagne Edition II” and “S”. Champagne Edition II was only in white with black accents. In the North American models of 1980, the S versions were sold in three colors: the White Alps, Black and Red Mars with unique color accents. Then followed the “S” version of 1981, which cars were painted in “Silver Cosmic Metallic”, “Gray Cirrus Metallic Clouds” and “Red Mars” without color accents. A manually retractable hatch on the ceiling was optionally available first for the “S” version, and then for the rest.