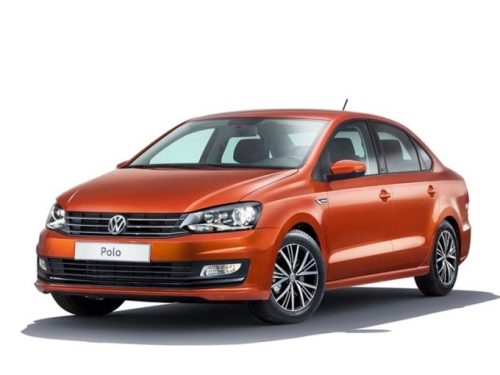 Volkswagen Polo is a compact car of the German autoconcern Volkswagen, which has been in production since 1975. Produced with bodies such as hatchback (Polo, Polo Coupe), sedan (Derby, Polo Classic, Polo Sedan), wagon (Polo Variant) and cargo van (Caddy). In 2010, it was recognized as the car of the year in Europe and in the world. Polo is consistently among the top ten best-selling cars in Europe. Since 2010, Polo Sedan is produced in full cycle at the Volkswagen plant in Russia near Kaluga.

After the end of World War II, most factories of the Auto Union were in the Soviet zone of occupation, where they were nationalized and dismantled. Nevertheless, several shareholders of the company, remaining in West Germany, in late 1945, tried to revive the Auto Union in its historic homeland in Ingolstadt in Bavaria. These titanic efforts led to the fact that on September 3, 1949 the company was registered and started the production of motorcycles and small delivery vehicles under the DKW brand. Things were gradually improving, but the strike of metallurgists in Bavaria in August 1954, one of the largest in post-war Germany, joined by workers of an automobile plant, seriously undermined the financial condition of Auto Union. As a result, in April 1958, 88% of the company’s shares were acquired by Daimler-Benz.

In the early 1960s, DKW cars began to lose popularity, mainly because of an anachronistic two-stroke engine. To correct the situation, Daimler-Benz management sent its specialist for engines Ludwig Kraus (Ludwig Kraus) to Ingolstadt, appointing him technical director. He was tasked with adapting the new four-cycle four-cylinder Daimler for use on DKW vehicles. Equipped with this engine, the front-wheel drive DKW F103 saw the light in 1965. Later this car was renamed Audi 72 and became the first car with this name in the post-war history.

The construction of a new car factory in Ingolstadt, started in 1958, and the general decline in demand for cars in the early 1960s led to the fact that by 1964 the financial condition of Auto Union had become deplorable. Despite the successful development of the parent company’s business, Daimler-Benz still decided to abandon the unprofitable enterprise and sold it in several stages, beginning in 1964, to the Volkswagen concern. Volkswagen’s management had a very low opinion of Auto Union products, in addition, the “Beetle” was sold well, and its assembly was quickly set up at a new plant in Ingolstadt. Moreover, direct instructions were given to stop all new developments. But Ludwig Kraus had a different opinion on this matter, and under his leadership the design was kept secret from the parent firm. Soon, Rudolf Leiding, who was sent by Volkswagen’s management to “sort out” the newly acquired asset, discovered plasticine models of the new car. The appearance of the future car and the technical novelties incorporated in its design, was pleasant to Leiding, and he defended a new project before the leadership of Volkswagen. So in 1968 appeared the famous Audi 100.

Then followed the Audi 80 and finally in 1974 – Audi 50, the last car created under the leadership of Kraus. A small car was right: at the end of 1973, a fuel crisis broke out and small, economical cars became more popular. Six months later, the production of this car under the new name Volkswagen Polo began at the car factory in Wolfsburg. The crisis was coming to an end, the German economy grew, and more and more German buyers turned their attention to big and expensive cars, so it was decided to reorient the firm and the Audi brand to the production of premium cars. In 1978, the production of Audi 50 was discontinued, and small cars under the brand Volkswagen Polo continued their march through the world markets.