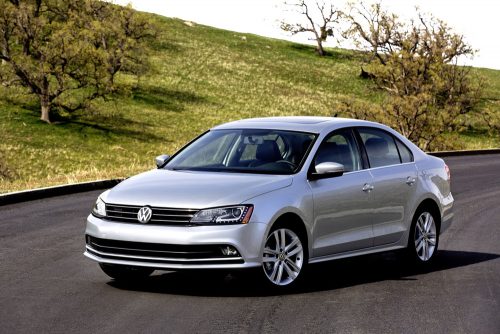 The Volkswagen Jetta is a compact car developed and manufactured by the Volkswagen Group. Manufactured since 1979. It is based on VW Golf. Unlike Golf with a standard hatchback body (shortened), the standard Jetta body is a classic sedan.

The name of the model comes from the German designation of high-altitude jet streams – Jet-stream. From 1979 to 2009, five generations of the car were produced, which in Germany (for the European market) were named: Jetta I, Jetta II, Vento, Bora and Jetta V. Outside Europe Vento and Bora were produced under the main name, respectively – Jetta III and Jetta IV. June 15, 2010 in New York Volkswagen introduced a new model – Jetta VI, which, according to the developers, unlike previous models, with VW Golf has nothing to do.

The following year, after the launch of the VW Golf, new body variants for this car were developed (in order to increase the luggage space) in the style of a classic sedan. But only in 1979, after three years of “meditation”, Volkswagen began to release the model Jetta (the name of the car during the design development was “Hummel”.) In addition to the increased trunk, the new car differed in some details of the front part. Starting with the model Jetta IV (Bora) differences in the details of the body became significant, but the engines, transmission, chassis and other “stuffing” (on all models) were the same as those of the VW Golf.

According to the type of body in mass production, the first two generations of the model (Jetta I and Jetta II) were produced with two- or four-door sedans, the subsequent – only four-door. In small-scale or piece production, by various firms not belonging to the Volkswagen Group, the Jetta was produced as a convertible and combi. With the body of the station wagon, the Vento Variant was planned for release, but in the batch production, the Golf Variant was replaced. From a number of Jetta five-door station wagon was produced Bora (Bora Variant). Subsequently, this model was supposed to be produced as a separate model from the Jetta, with the following types of bodies except the classic ones: sport lifestyles, cabriolets and coupes (as a replacement for VW Corrado, stopped in 1995), but only Variant was launched. Since the Jetta was not very successful on the market, potential customers were constantly offered individual models, produced in small series – Strada, Beach, Coach, Court, Pacific, Flair, TX, Style “, which differed from the basic ones in different variants of equipment, interior trim material, varnishing, etc.

By December 2014, Volkswagen announced the release of the all-road version of the Jetta Alltrack.