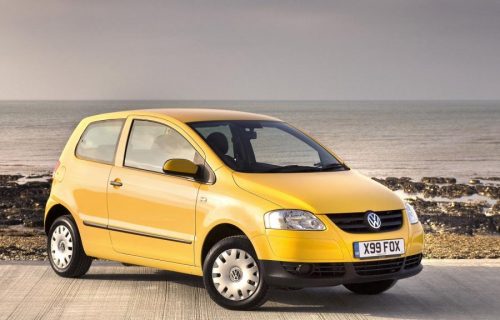 Volkswagen Fox – the car of the A-class concern Volkswagen AG. The car is the successor to Volkswagen Lupo.

The length of the Fox is 3805 mm, the wheelbase is 2465 mm, it is developed by the Brazilian division of the concern and is sold in the markets of Latin America since 2003. The car, built on a platform PQ24 (McPherson racks in front and a beam that is twisted from behind), was delivered to Europe from 2005. Modifications for the Old World were only three-door and completed with three engines: petrol 1.2 (56 hp, 108 Nm) and 1.4 (76 hp, 124 Nm), as well as diesel 1.4 TDI (71 hp, 155 Nm) On the home markets were also sold five-door hatchback, as well as pseudo-crossovers of CrossFox. The Foxes for South America had their engines: petrol 1.6 (98 hp) and quatrain 1.0 (73 hp) and 1.6 (103) Total Flex family working on bioethanol. Automatic gearboxes on Fox were not set in principle – only a five-step “mechanic”. Fox is still available in Brazil and Argentina. Now in Europe it is officially available in Portugal and France.

At a low starting price, the buyer gets an extremely modest base. Basic models come with a CD player and steering booster. If you want to get an electric drive of the front windows, a central lock with remote control and bumpers of other colors, it is worthwhile to go to Urban. The air conditioner is an option regardless of the complete set. Two front pillows take care of the safety of passengers and driver. For side pillows have to pay extra. Curtain pillows and stability control are not available at all.