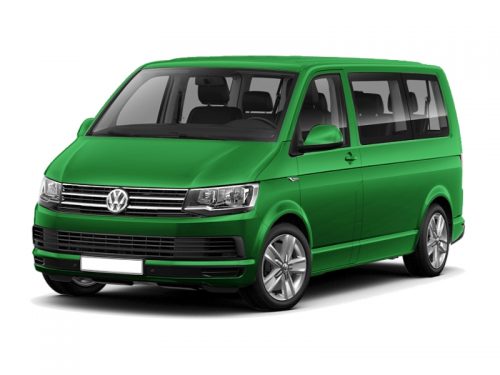 One of the most popular minibuses in Europe today appeared in 1990. He received the unusual and beautiful name Caravelle.

The first generation of the Caravelle was a rear-wheel-drive minivan of an old-fashioned design with a rear-mounted engine.

In 1997, the model undergoes changes. Few converted the front of the car (put a new bumper, there were slightly beveled headlights with white optics of the turn signal).

But what was especially important was the increased hood, now under it you could place any of the Volkswagen engines, for example, a sports V-shaped six-cylinder engine with a power of 140 hp.

In addition, the car is equipped with a choice of four-and five-cylinder petrol and diesel engines. The maximum speed with the V6 engine is 199 km / h, and with a diesel engine with a turbo-supercharging capacity of 102 hp. – 157 km / h. There was a new comfortable front suspension, disc brakes on all wheels, ABS and air bags. The basic equipment also included electric front windows and mirrors, heated seats, a cleaner and heated rear door glass, an independent stove with a timer and a radio. It is worth noting the high level of interior trim and complete set. The transformation of the seats is very easy and convenient, at the request of the car owner, they can turn into a magnificent table or simply flat surface.

The problem of ventilation of the cabin was eliminated by installing a heat exchanger with a control unit and a developed air duct system. From now on, passengers can choose the temperature and intensity of the cabin airflow independently. The undoubted merit of the VW Caravelle is its ability to tow a trailer weighing two tons and excellent noise insulation.

In 2002, Volkswagen introduced the new generation of Caravelle. It has many similarities to Multivan. For example, exactly the same headlights and a bumper painted in body color. Now on Caravelle it is possible to install automatic transmission and 4Motion all-wheel drive system. If desired, you can equip the cabin with a 2-zone automatic air conditioner “Climatronic”.

The new Caravelle is produced in a short-haul and long-bodied version. In the latter version, the car can accommodate up to 9 people. The interior equipment has become more diverse, a beautiful panel design and a lot of possibilities for placing personal items create a feeling of comfort.

The safety of passengers will be taken care of: an independent suspension of the front and rear wheels, ensures a reliable grip of the wheels with the road; a system of front and rear disc brakes with a special regulator of braking forces; the three-hinged steering column in the event of an accident prevents the steering wheel from moving to the driver’s side; locks of seat belts fastened directly to the frame of the seats ensure optimal fit of the straps for any combination of driver and front passenger and any seat installation; All the glass are pasted into the body openings, this increases its strength; ABS; airbags for the driver and front passenger.

Also in 2002, the Caravelle Business model was introduced. According to the idea of ​​the creators, it is meant for business people. The model is equipped with modern electronic communication systems: it is possible to install a mobile phone with two handsets, a fax machine, a video recorder, a TV, etc.
Additionally, if desired, the dashboard and the table can be separated by the skin. Among the additional equipment is almost everything that can only be needed on the road, from a compact dustbin to a refrigerator.
Of the driving force to choose from, two engines are offered: a 6-cylinder turbo diesel with a capacity of 2.5 liters and a power of 150 hp. and gasoline 204 hp.

Very soon the updated version of Caravelle will be released. In basic equipment, the car received dual headlights and a three-zone air conditioning system. Among the new versions is worth noting the option with a raised by 1.94 meters from the floor of the roof, which allows passengers of high growth, without bending to move inside the bus. The new Caravella is equipped with four turbodiesel TDI with a capacity of 85-174 hp. and two petrol engines with a capacity of 115 and 235 hp. Prices for new Volkswagen not yet installed, but the automaker promises to decide on them in the near future.

Capacity, comfort and unique possibilities of transformation – these advantages are equally characteristic of all models of “Caravelle”. Designers have taken care of everything that should make it pleasant not only to travel, but also the very stay in the car. For these undeniable advantages, the Caravelle model is in demand among buyers.

Being an expensive version of the Volkswagen T4 minivan, the Caravelle differs from the “basic” Transporter model with trim and saloon trim. Turn a minibus into an office on wheels will not be very difficult, to transport a batch of goods – please meet guests at the airport – no problem. The list goes on.

In the Middle Ages, the French shipbuilder from Brittany, Julienneall, applied a new method to recollect the ship’s skin, giving it the name “Coral”. Thus were born caravels, one of the first ships on which the Spanish navigators went to storm the oceans. And in the XX century, the VW-Audi group used the name “Caravel” to refer to the luxury modifications of its minivans.

Definitely to say, that was the reason to call the car such a sea name, you can not – you can only guess. The method of “coral” is that the hull of the vessel is recruited from the densely packed boards, it turns smooth and slides easily over the water surface. That’s why the caravels were used for distant wanderings. Look at the creation of the Volkswagen concern: perfectly fitted body panels, a light fast body – in short, not a bus, but a caravel. Since its inception in 1991, it has become the most popular minivan in Europe. Even tuning companies turned their attention to this car, which had not happened before. Over the years, the appearance of a well-known minibus has undergone minor cosmetic changes. In 1997, the front was noticeably transformed: the front bumper changed, slightly beveled headlamps appeared with white optics of turn signals. But this was done not only for aesthetic reasons – now under the increased hood can accommodate any of the Volkswagen engines – both diesel and gasoline, up to VR6.

We had a modification on which an atmospheric five-cylinder diesel engine with a working volume of 2.4 liters is installed. In the rest – it’s still the same light and swift body, in the back of which there was a cover for ventilation of an additional autonomous stove. And the aluminum wheels of the famous brand BBS only complement the luxury modification. “Caravel” really can discover new countries and continents.

Being an expensive version of the Volkswagen T4 minivan, the Caravelle differs from the “basic” Transporter model with trim and saloon trim. Turn a minibus into an office on wheels will not be very difficult, to transport a batch of goods – please meet guests at the airport – no problem. The list goes on. “Coral” can be seen in the interior trim. Perfectly fitted torpedo and upholstery details, well-thought-out controls and a set of electric drives allow the minivan to not yield to business class cars. External changes in the organization of the driver’s workplace, in comparison with the first modifications, you will not find, except that the steering wheel “protect” the airbag, and on the passenger side instead of the cavity on the torpedo inscriptions “airbag”. The same equipment includes electric front windows and mirrors, heated seats, a cleaner and heated rear door glass and heated windshield washer nozzles, as well as a full-time radio and an autonomous oven with a timer. Behind the backs of the front seats “Caravel” continues. The spacious interior pleases with a bright upholstery and quality of execution. All the seats are folded, and easily and simply, by pressing the keys and levers, at the same time an even platform or a magnificent table is formed. One of the serious complaints against this generation of minivans since their release was the weak ventilation of the cabin. To modify this fault, a separate heat exchanger with a control unit with a developed air duct system is designed for the Caravelle modification. Now the passengers can independently set the temperature and intensity of the cabin airflow. The air ducts are located on the floor and on the ceiling and cope with the heating of the spacious hall. In a small luggage compartment, separated from the passenger compartment by a massive lid, it is easy to place luggage in the heels of suitcases and bags. On “Caravelle” you can ride comfortably in countries and continents, which was done on the caravels of the Middle Ages, traveling on the seas and oceans.

As a driving force of the minivan, a diesel engine of five cylinders with a capacity of 78 liters is used. from. together with a five-speed gearbox. Maybe not the most powerful, but certainly the most reliable and trouble-free unit in the VW family. The character is very smooth and traction, it confidently disperses both empty and loaded minivan, and a five-speed box, the lever of which is located on the floor, pleased with the clarity of the inclusion. As for the suspension, it is closer to the car than to the cargo, but to compare it with the T3 suspension is just not right, although many remember with admiration those rear-engine cars. By the noise level in the cabin, this is certainly a car, and for the comfort of movement, too. Another advantage of VW Caravelle can be considered its ability to tow a trailer full weight of two tons, which is undoubtedly a big plus of a commercial car. Today, the VW Caravelle offers a wide range of engines and gearboxes. And if this modification looks in the city flow is quite average, then with the engine VR6 turns into a sports projectile. And also these cars are produced with the all-wheel drive transmission syncro …