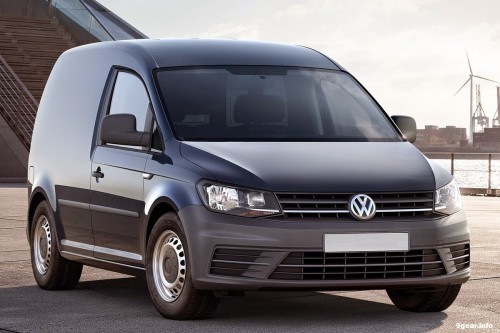 Volkswagen Caddy is a compact van that represents the German automaker of Volkswagen since 1982.

There are such generations of VW Caddy:

The first Caddy pickup appeared in the Yugoslav city of Sarajevo in 1982. When it was created, the standard used for that time was used: they took a serial car, extended the base, instead of the rear of the body a cargo compartment was applied and the rear suspension was reinforced. Initially, the Volkswagen Caddy was created exclusively as a truck wagon: its interior was absolutely not adapted for the carriage of passengers. The car was made on the platform of the Golf model of the first generation, and in the appearance of much borrowed from Polo. For example, the front part of the body up to the door and rear view mirror.

The model is equipped with a 1,6-liter gasoline carburetor engine of 81 hp Rear suspension bracket, chassis reinforced. As an option on a pickup, a plastic top was mounted with or without a lifting rear wing.

The release of the first generation lasted until 1992.

In 1995, the second generation of Caddy (Typ 9KV) appeared. The principle of construction was completely preserved: the front part of the compact and cheap car segment B – SEAT Ibiza (platform A03), an elongated wheel base and spacious body. The engine is diesel, with only the most necessary options. He enjoyed great demand in Western Europe. Small firms, product retailers and other organizations that constantly ship small batches of goods or equipment were Caddy very satisfied.

The production of the second generation Caddy in Europe stopped in 2004, and in Argentina, the model is being manufactured further.

The same generation is Caddy (Typ 9U), although it is a completely different car – the badge-engineered Škoda Pickup model, which in turn is based on Felicia. Such a Caddy was manufactured in the Czech Republic.

In 2000, the market for passenger cars was undergoing a revolution. The world giants of the automotive industry presented new models that were designed not only for the transportation of goods, but also for passenger operations. Renault releases Kangoo, followed by Opel Combo and Ford Tourneo. Adhering to the trends of today’s market and demand, Volkswagen in 2004 produces a new Caddy on the platform PQ35 from Golf V.

The New Caddy family is a new generation of technological vehicles of universal application. The reliability, which became the card of the previous generation of Caddy, has found its continuation and in the new model.

The third Caddy is made one-dimensional, that is, its body is a single unit – like a minivan. The cargo compartment on the new Caddy is now no longer separated from the driver’s cabin by the step as it was in the second-generation Caddy. At the same time, he has also grown significantly in all directions: the width of 106 mm, the base of 81 mm, and the total length of 172 (up to 4.4 m). The volume of the luggage compartment increased by 300 liters and reached a value of 3.2 cubic meters.

New Caddy can carry 750 kg of cargo inside and 700-740 kg (depending on the engine) on a trailer without brakes or 1,2-1,5 tonnes on a trailer equipped with brakes.

Like every modern car, the New Caddy is equipped with active and passive safety systems – ABS, anti-boot (ASR) and even a system for monitoring the braking of the MSR engine. Additionally, an ESP anti-lock system can be ordered.

Volkswagen Caddy Kasten is a modern technological vehicle for business trips and cargo delivery. The floor of the cargo compartment is made of sheet iron, which significantly increases its durability and protects against possible damage. In addition, the bottom edge of the cargo hole is a protective overlay, and the sidewalls of the cargo compartment are upholstered from below with a sturdy plastic, which eliminates the possibility of damage to the cabin.

For fastening of loads there are 6 rigging loops. Access to the compartment is through the backstop rear doors or through the widest in this class of cars side sliding doors.

The interior is designed to provide maximum comfort for the driver and passenger. The steering column is regulated in two dimensions, which makes driving a Caddy Kasten comfortable for any driver. Passenger and driver’s seat have adjustable longitudinal position and tilt of the backrest. To create an excellent and comfortable microclimate in the cabin, there are systems of heating and ventilation with an anti-dust and anti-allergenic filter.

The instrument panel is distinguished by functionality and high performance. Owners of gasoline engines will find on the panel an indicator of brake pad wear.

The body is integral, partly galvanized with anti-corrosion treatment and a guarantee of continuous corrosion for at least 12 years. Caddy Kasten suspension combined: front – independent, and rear – spring. Telescopic shock absorbers are equipped with a stabilizer of transverse stability. For braking, the reinforced hydrodynamic two-circuit braking system corresponds.

Caddy Kombi – a passenger and freight wagon. It has a spacious interior that allows you to conveniently accommodate up to 7 passengers in a car. His main advantage is transformation. If it’s not possible to make a passenger van from Kasten, then Kombi is also. You just have to fold or completely remove the rear seats. Therefore, a passenger is called Kombi, which means “combined”, that is, one that may be both. Here as well as on the Kasten combined suspension. Passive safety Caddy Kombi provides 4 airbags: two front and two side for the driver and front passenger. All seats in the cabin are equipped with three-point seat belts with vertical adjustment and ancillary couplings. Caddy is equipped with an additional signal of braking and fog lamps. Equipped with a glazed body and lifting rear doors. If desired, the car can be supplemented: heated front seats and two electric windows. The cabin has plenty of space for small things that may be useful for passengers on the road. These are numerous shelves on the front panel, bulky boxes under the front seats and already traditional gloves.

For safe and reliable fastening of cargo there are 4 rigging hinges, drowned in the interior of the cabin.

The Caddy assembly is carried out at the VW plant in Poland.

Since 2010, a modernized model with new optics, radiator grill, bumpers and equipment and some new engines are being manufactured.

In 2012, an unusual version of the Cross Caddy with an off-road curtain came out.