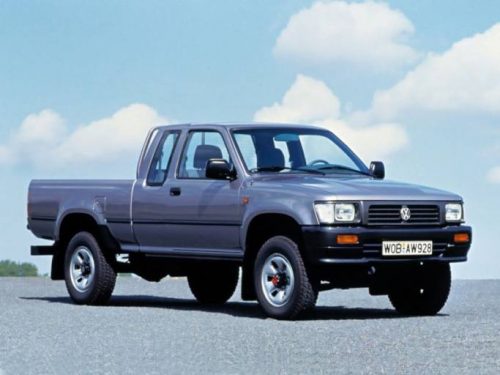 The reasons for which such an unusual car appeared in the Volkswagen model line a few, the Germans wanted to fill the gap in the produced cars between the tiny Caddy and the big Transporter minivans, and Toyota in turn wished to make itself known in the European market. Yes, the Volkswagen Taro is all just renamed Toyota Hilux, one of the most reliable cars in the world!

The first Volkswagen Taro got off the assembly line in German Hanover in 1989. It was a standard pickup truck with a well-proven 2.4-liter diesel engine with 82 hp. and giving out 165 Nm of torque. At first, the European market offered Volkswagen Taro exclusively with a rear-wheel drive and a manual transmission. The huge trunk of the Volkswagen Taro has an area of ​​3.4 square meters with a useful load of just over 1.1 tons.

Five years later, Volkswagen introduced the all-wheel drive version of Taro with an enlarged cab. Together with these innovations Volkswagen Taro began to install and more powerful power unit – 2.4-liter “diesel” now develops 79 hp. and 163 Nm. The increase in the cabin was made at the expense of the body capacity, now it has an area of ​​”only” 2.9 square meters, and a lifting capacity of 815 kg. Unlike rear-wheel drive models, the Volkswagen Taro 4X4 was produced in Japan, at one of the Toyota plants.

Volkswagen Taro lasted a little more than eight years on the assembly line, until early 1997 proved itself no worse than its Japanese twin brother.