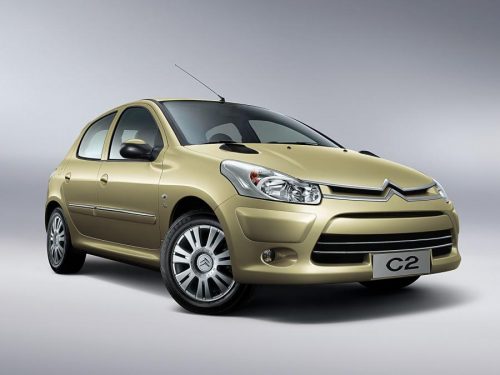 Citroen C2 – a small stylish three-door hatchback with front-wheel drive and front-engine layout. Produced from 2003 to 2009 at the plant in the town of Aulnay-sous-Bois in the north-eastern suburbs of Paris. The model is developed on the shortened platform Citroen SZ.

Unusual in appearance Citroen C2 debuted at the Frankfurt Motor Show in 2003. The novelty, which replaced the obsolete Soxo subcompact, was met with great enthusiasm by the public.

The designer of the car, Donato Coco, combined the smoothness and dynamics in the appearance of Citroën C2 – the rounded lines of the body “burst” with sharp-angled headlights and sharp diagonal lines of the rear windows. Koko specifically directed them down to not only create an interesting visual effect, but also provide better visibility to the passengers sitting behind.

Interior decoration was no less original than the appearance of Citroen C2. The car interior can be decorated in bright colors (amber, green, blue) or in a calm gray tint. Color inserts are used for finishing the seats and door panels. In the tone they picked up a transparent plastic gearbox handle and overlays on the door panels.

In the fall of 2005, sports versions of the Citroen C2 VTR and VTS with more “sharp” steering, rigid suspension and power units with a capacity of 110 hp were introduced. and 125 hp. respectively.

The creators of the Citroen C2, in addition to standard transmissions, also offered to put a robotic “box” SensoDrive, which is designed for versions with motors in the volume of 1.4 and 1.6 liters. With her help, the driver could choose the manual or automatic mode of the transmission.

The car was equipped with a buzzer speeding. If you’re driving a rookie, you could program the maximum speed, after reaching which the car began to sound a beep, suggesting to move slower.

In contrast to the rear three-seater sofa, presented in the Citroen C3, in the “two” are two separate armchairs. Thus, accommodate in the car can only four people. Each of the front seats moves in the longitudinal direction to access the rear seats. Due to the presence of mechanical “memory”, the seats return to the same position from which they “opened”, without additional adjustments.

Owners of Citroen appreciated the door of the trunk C2, which consists of two doors: the top and bottom. Among cars of a class “super-mini” it almost does not occur. You can only open the top of the door if there is not enough space in the parking lot. The lowered part of the door can be used as a convenient bench if desired. Also in the niche of the lower door there is a small box for small things.

However, drivers of C2 complain of poor noise isolation, in contrast to the owners of the hatchback Peugeot 206, which in the cabin is much quieter. Do not like the buyers and the rigid suspension of the “deuce”, but the owners of Hyundai Getz do not have similar problems. And, importantly, all owners of Citroen C2 do not understand why this model compared with classmates so overpriced.

Sebastien Ozhiei in the WRC rally brought the French victory in 2008, and in 2009 the winner was Martin Prokop. And this is not all: the Russian racing driver Alexander Sotnikov, who in 2005 played for the Dynamo Motorsport team, won the RTCC Cup in the Touring Light with a Citroen C2 car.

In order to strengthen its position in the Chinese market, in 2006 Citroen C2 began to sell the converted Peugeot 206 under the name Citroen C2.

Among its classmates, Citroen C2 stands out with the brake-assist emergency braking option and six airbags (there are four of them in the C2 standard). Citroen C2, like no other of his “colleagues”, excelled on crash tests EuroNCAP, earning as many as four “stars” for safety.