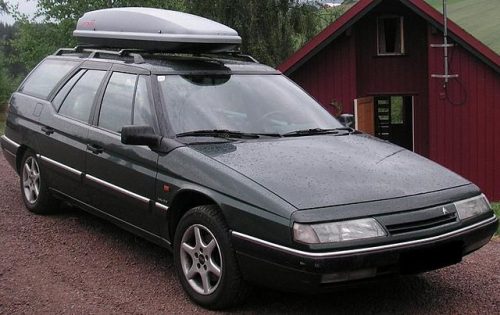 Like the Citroën DS, the Citroën GS and the previous model, the Citroen CX, the XM was equipped with a hydropneumatic suspension, with its improved version – Hydractive. She made the XM the first serial car with an electronically controlled suspension.

The XM was developed by three design bureaus: Citroën, Peugeot and the Bertone agency. In the new model, there was an unmistakable similarity to the body of the line Citroën SM, coupe, which was issued from the summer of 1970 to the spring of 1975. However, it can be noted that the versatile design of the XM, similar to the arrow, was the further development of the concept Citroen BX from the famous Italian designer Marcello Gandini, the “father” of the Lamborghini Countach.

The XM was presented at the IAA automobile exhibition in Frankfurt in September 1989, in the same year, 2000 units were sold only in the Federal Republic of Germany. Also, XM was chosen by car in 1990. In 1991 and 1992 readers of the German magazine “Auto Motor Und Sport”, assigned the XM title “the best imported car in its class”.

In the course of the changes made in 1994, a system was installed that allows the automation to independently change the clearance depending on the conditions of the ride and the type of road surfaces. There are a lot of prejudices about the Hydractive suspension, but in reality, the problem with it is extremely rare in the process of exploitation. In high-tech Citroen XM sets, electric windows are available and the steering column control function is altitude. All materials used in finishing, high-quality and wear-resistant.

At first XM was made only as a hatchback. Since November, 1991 he has begun to be sold in version of the versatile person with a big trunk under the name XM Break.

The XM model was proposed by the manufacturer as a limousine. The XM Break has been rebuilt in ambulances.

Electronics in the Y3 series has been revised twice. The second Y4 XM series with a Hydractive II suspension is considered mature and reliable.

If the Citroen CX model used the rear concave glass, which later “inherited” the model C5 (RD / TD), the XM model was remembered by the so-called “13 glass”, which separated the hatchback from the boot. It is worth noting that Skoda engineers later used this idea in their flagship Superb model, refining and naming it – Twindoor.

One thought on “Citroen XM PDF Workshop and Repair manuals”