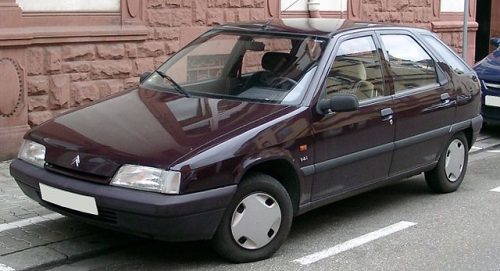 Citroën ZX – a passenger car manufactured by Citroën from 1991 to 1997. In 1992, the car took the third place in the European car competition of the year.

The debut of Citroën ZX took place in 1991. The model lasted more than six years on the conveyor belt and was very successful in Europe. The predecessor of the ZX, Citroen GS, was once very popular, so the company’s specialists were not to harm. The car was created with an eye for the predecessor. Even the sizes should be identical. But in the end, the ZX turned out to be a completely new car, even outwardly unlike the previous model. Initially, only the most popular 5-door hatchback was produced, in addition to which subsequently released the 3-door version (late 1992) and the universal Break (November 1993). In total there were four levels of equipment Citroen ZX. Reflex is the simplest and cheapest equipment. Advantage combined low cost with good equipment. Aura is the most complete package for a demanding buyer. Volcane – a sporty version with powerful engines.

In July 1994, restyled the model. It was necessary to eliminate the structural and technological deficiencies that were revealed in the car during the first years of operation. Instead of a “dull” radiator trim, a false-grille grid with an emblem in the middle appeared, and some additional equipment, for example, an air conditioner, was available. In 1997, the last European ZX came off the assembly line. His successor was Xsara, which has much in common with the ZX, but is a new model.