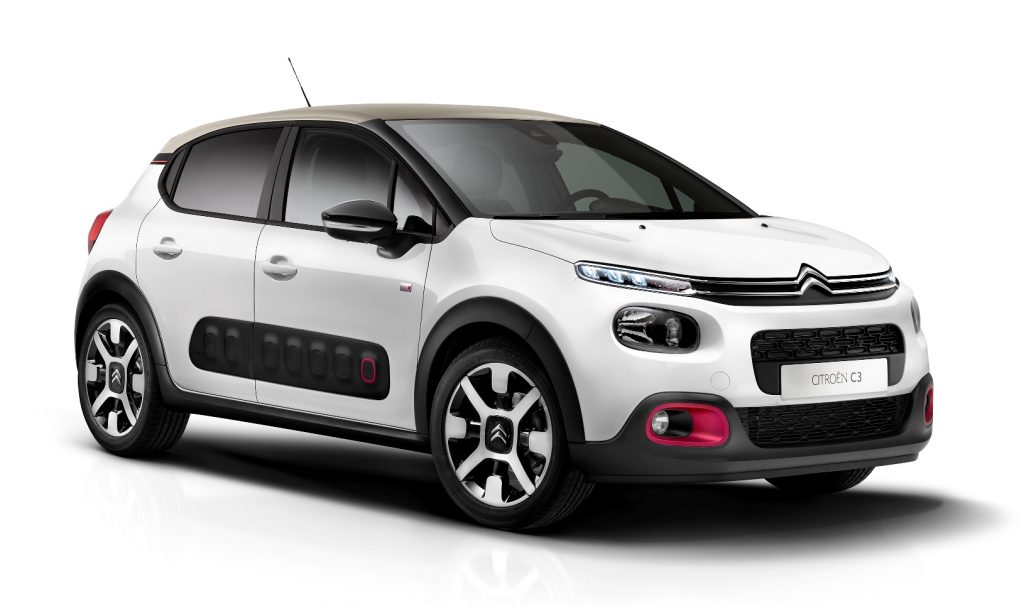 Citroën C3 – compact car with a line of in-line four-cylinder engines, produced by the French company Citroën since 2002. Available in several modifications, as well as in the cabriolet version. Mini MPV version C3 was announced in July 2008 and named C3 Picasso, presented at the Paris Motor Show in 2008 and went on sale in early 2009.

In 1998 at the Paris Motor Show Citroën the conceptual model C3 Lumière was presented. Created in the Center de Création Citroën in a key combining style and functionality, under the slogan “Being on the road at home”, the concept demonstrated the vision of Citroën designers, what a compact car of the 21st century will look like.

The distinctive features of the concept were: the roof and the hood in the form of an arc; high body height in relation to length; a body without a central stand and doors that swing open in opposite directions; The rear door consists of the upper and lower halves on the hinge; a glass roof, recruited from transparent plates with a drive, allowing them to slide back or adjust as a blind; vertical rear lights of triangular shape; rear-view mirrors in the form of a sector; an ascetic front panel with an analog cluster in the form of a circle, leaving a circular shaft in the center of the panel; salon, transforming in a wide range; Run flat tires; Pockets in the front doors, simultaneously serving as a handbag with the Citroën logo.

The success of the concept was decided to be repeated in the serial model, although most of the design solutions applied on the concept were lost when adapting to production and for improving safety. But in general, the serial C3 is very similar to the C3 Lumière, in which features such Citroën models as 2CV and Dyane are guessed.

The car was designed by Donato Coco and Jean-Pierre Ploué, previously known for the design of Renault Twingo.

This is the first Citroën car that had multiplex wiring from the very beginning of production (Xsara received it only during restyling) [source not specified 908 days]. It is also the first car of the PSA Group, which has gained an advantage from the installation of HDi diesel engines of small working volume. A rich equipment for its class and a large selection of accessories allowed C3 to achieve significant commercial success.

The C3 was available with petrol engines 1.1, 1.4 and 1.6 liters, as well as 1.4 and 1.6 liter HDi Common rail diesels. All models were standard with a five-speed manual gearbox or an optional semi-automatic with paddle shifters, with the exception of the Stop & Start models, which were equipped with a Citroen Sensodrive – a five-speed semi-automatic gearbox with manual and automatic modes. The SX version was the only one with a fully automatic “classic” four-speed gearbox.

The car was equipped with electric power steering. Also remarkable was the installation of a panoramic transparent roof as an option.

In accordance with the policy of the PSA Group, the C3 chassis was used for the Peugeot 1007 and Peugeot 207. Many components of the C3 are borrowed from the Peugeot 206.

In July 2009 Citroën showed the second generation C3. A new body design with a panoramic windshield giving a field of view of 108 degrees was presented. A similar panoramic glass is installed on the older C4 Picasso and hatchback Opel Astra Sport, also available on a brand new VT model. Just like the previous generation, the new C3 uses a sloping roof shape and other design details of its predecessor, and has design features that resonate with other models of the brand, although it is wider and longer than its predecessor. Headlamps, hood, dashboard and other components are common with the DS3 model. The new C3 uses a mixture of analog dials under the visor and a digital display of the fuel consumption indicator and on-board computer. There is no coolant temperature indicator (unlike DS3), but there are blue and red signal lights to indicate the cold or overheated condition of the motor.

From an engineering point of view, the model received engines from its predecessor, but Citroen announced a new line of small petrol engines that the PSA created in cooperation with BMW. This line of Prince motors has a sixteen-valve cylinder head with two camshafts and VVT, the company’s direct fuel injection and BMW ignition systems. The engines are economical, have low CO2 emissions and good performance. Go in versions 1.4i 95 hp. and 1.6i 120 hp, are also available on other PSA and BMW models. All engines, including diesel, have CO2 emissions below 120 g / km, and Airdream + versions – up to 99 g / km using a new 1.6 HDI diesel engine (67 kW, 91 hp).

The economy has also been improved by installing a cruise control and speed limiter, available as standard equipment in the VTR +, Airdream + and Exclusive trim levels. All models are equipped as standard equipment with the indicator of “transmission efficiency” – the device graphically indicates which gear should be switched on and when it is necessary to change the gear up or down in order to optimize fuel consumption.

The new C3 was introduced at the Frankfurt Motor Show in September 2009. It was launched in November 2009 as a 2010 model year model. In Europe, there was an advertising campaign under the motto “The Visiospace” – beating a panoramic windshield with an extended view.