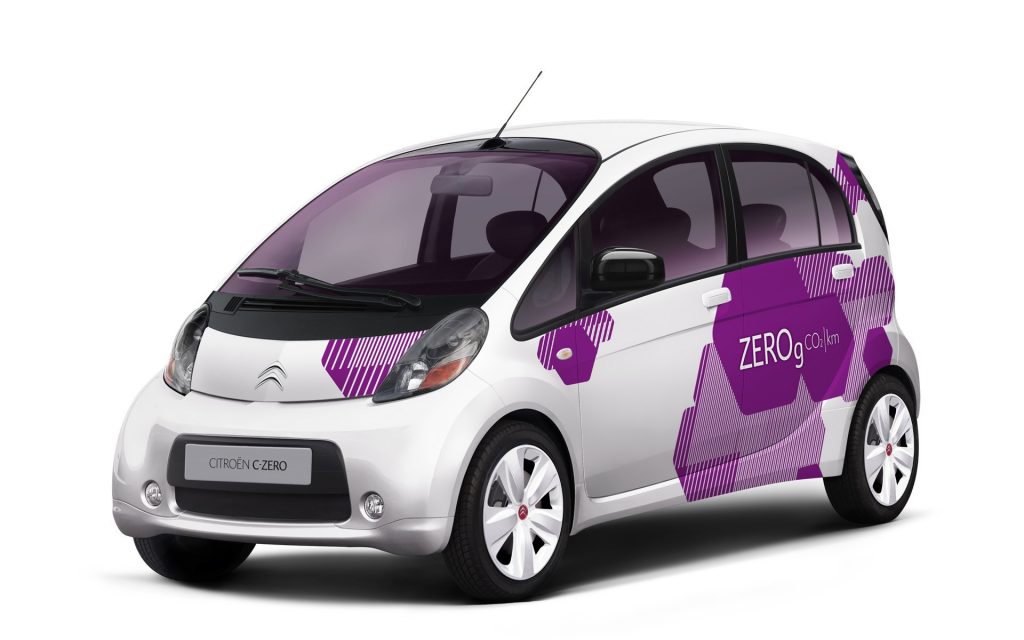 Zero fuel consumption, zero exhaust and absolute noiselessness … With the advent of C-ZERO, CITROËN extends the range of compact cars with a 100% electric vehicle.

The new model perfectly reflects the concept of “Créative Technologie”. C-Zero is designed to make life easier for residents of megacities due to their compactness, fast recharge of batteries and a large power reserve for everyday trips. And all this in complete silence, which will allow the driver and passengers to take a break from the city bustle. Citroën C-Zero embodies the creative approach of designers and manufacturability, which already today meet the needs of tomorrow.

CITROËN’s Full Electric electric vehicle technology is part of a strategy aimed at global reduction of fuel consumption, reduction in emissions of air pollutants, and emissions of greenhouse-enhancing effects.

The first cars Citroën C-Zero go on sale at the end of 2010. In the first quarter of 2011, the number of serial electric vehicles will increase steadily. Citroën C-Zero, developed in cooperation with Mitsubishi Motors Corporation (MMS), is the second car of the electric car family Citroën, the younger brother of Citroën Berlingo First Electrique.

Citroën C-Zero is the first electric car of the new generation available in Europe. Although the C-Zero is designed as an electric car, it retained all the qualities of the best traditional cars of its class: safety, comfort and convenience (ESP, 6 airbags, a 166 l boot, etc.)

Citroën C-Zero has a relaxed driving style. Easy to operate, the car surprises with silence and an excellent ratio of space in the cabin and compact body dimensions.

Citroën C-Zero combines the use of the latest technology (in particular lithium-ion batteries), with many years of engineering experience CITROËN, which has launched more than 5500 electric vehicles on the market. C-Zero paired with Berlingo first Electrique allows CITROËN to claim leadership in the segment of modern electric cars, which will expand in the coming years.

Citroën C-Zero is equipped as standard with the Citroën eTouch communication system, which corresponds to the general technological level of the car and provides a range of services, including assistance call and communication with the maintenance center. In addition, the standard feature includes the Bluetooth function.

A full-fledged car, convenient in real life, in the city and on the road.

Citroën C-Zero combines qualities that make it an ideal vehicle for traveling both in and outside the city. Including thanks to the quiet operation of the engine, which can be appreciated by both passengers and passers-by, and also due to zero pollution of the environment and CO2 emissions.

Thanks to the wheelbase of 2.55 m in the Citroën C-Zero provides 4 full seats. The volume of the trunk is 166 liters. In addition, the C-Zero as standard is equipped with numerous equipment providing comfort and safety: power steering, ABS, ESP, EBD, electric windows, 6 airbags and air conditioning.

Citroën C-Zero is very simple to handle: just turn the ignition key to the audible signal, see the “READY” light on the screen and bring the speed lever reminiscent of the automatic transmission selector to the only possible position for driving.

On-board computer Citroën C-Zero, in addition to traditional sensors, is equipped with a device, the arrow of which, when the motor starts, indicates the mode of operation of the battery:

The battery status indicator replaces the traditional fuel gauge. He warns the driver about the approach of the battery charging level to a minimum. Shortly thereafter, some modes of operation become unavailable, after a while there is a restriction on the use of the full power of the engine in order to increase the power reserve on the remaining charge.

In order to simplify driving and starting from a place on the slope, the Citroën C-Zero design uses a control scheme familiar to drivers with an automatic transmission.

Given the characteristics of the electric motor, for which the maximum traction is possible immediately after the engine starts, the gearbox installation does not make sense. Citroën C-Zero is equipped with a specially adapted demultiplier and a traditional differential, which are located at the rear of the car, next to the electric motor.

Due to two modes of operation, the need for a stepped transmission and a gear selector for normal forward travel, acceleration or braking, disappears by itself. The simplicity of the device makes the movement process easy and easy, which fully corresponds to the philosophy of an electric car.

Citroën C-Zero is equipped with a system that allows you to save energy in the mode of reducing speed and when braking, which recharges the battery. The amount of this energy depends on the speed and the force of the pressure on the brake pedal. Batteries are charged during the ride – when the accelerator pedal is released, which allows you to brake the engine as the turn or intersection approaches, which makes the driving experience more natural and familiar, in addition, engine braking reduces wear on brake pads and discs.

The electric motor is powered by lithium-ion batteries of the latest generation. The battery consists of 88 batteries of 60 A * h, the useful capacity of the battery is about 16 kW * h, voltage – 330 V.

The use of lithium-ion batteries allows:

Charging the Citroën C-Zero battery is simple and can be done in two ways:

The batteries are designed for 1500 full charge cycles.

As for all electric vehicles, the test for the range and consumption of electricity by the car passes within the framework of a full test cycle identical to that carried out with cars with ICE (NDEC Europe regulations). In the case of the Citroën C-Zero, according to the test results, the autonomous operation is sufficient for 150 km. As for an ordinary car, energy consumption is influenced, to a greater or lesser extent, by several factors, for example, the use of heating and air conditioning, which work by electricity, as well as the driving style, which, like a car with ICE, can be noticeable to change the indicators of energy consumption.