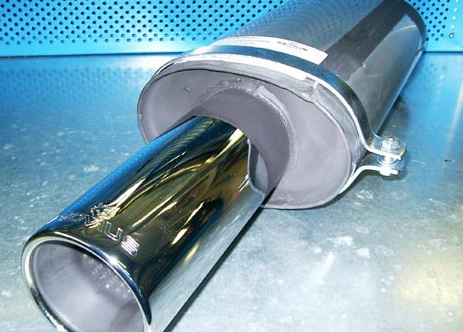 True car tuning enthusiasts probably don’t represent their cars without direct exhaust. However, not everyone knows when and on which cars a direct exhaust will serve not only as decoration, but will also perform certain functions. Agree, snarling pretty worn penny with a huge pipe instead of a muffler, looks at least silly. Another thing is “Japanese”, which has pronounced elements of professional tuning, and leaving behind a noble growl, will always please not only your hearing, but also the appearance, you will enjoy.

What is direct exhaust?

From a scientific point of view, a direct-flow muffler is an element of the exhaust system, in which the movement of coolants and products of combustion of fuel in an internal combustion engine in a closed space in one direction is parallel to each other.

If in simple words to describe this element of the exhaust system, then we can say the following. Exhaust occurs through a pipe that is enlarged in diameter with smooth curves, and which has the least number of joints. In such a pipe there is no silencer, and its function is performed by its special geometry. Thus, on the basis of this, it can be concluded that the device of a direct-flow muffler contributes to quick and easy exhaust of gases from the cylinders of the internal combustion engine, which favorably affects the best blowing and as a result of this increases the efficiency of the engine and power up to 15%. However, it is important to understand that it is impossible to take a straight through muffler like this and just install it. Installing a direct flow with your own hands is a rather complicated procedure; to perform it you must have certain knowledge and experience. During the modernization of the exhaust system under the direct-flow exhaust should be aware that the changes will apply not only to the muffler, but also the exhaust manifold, as well as other elements of the issue. After installing the forward flow, it will be necessary to set up the power supply system of the car on special equipment, otherwise there will be no need to talk about any result of this refinement.

The pros of direct-flow muffler

The cons of direct-flow muffler

And finally, wishing to install a direct-flow exhaust system on your car will need to pay at least $ 2500.

There is an opinion that the direct flow, which was established by all the rules, practically does not create excessive noise, and instead of a growl you can hear only a pleasant bass sound. In principle, this judgment has the right to exist, since, watching professional competitions in drifting or drag racing, you will not hear a crazy roar. But if on the tachometer the needle is close to the red scale, then in this case the regular silencer can also make a hellish roar.