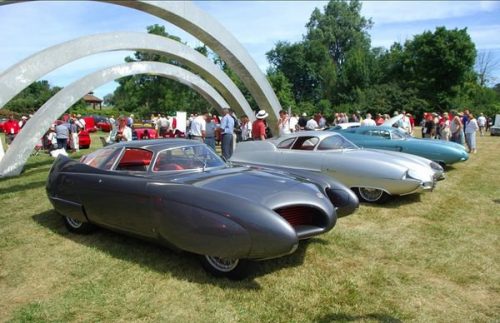 The Italian concept cars Alfa Romeo BAT arose as a result of a joint project between Alfa Romeo and the Italian design house Bertone, which began in 1953. Alfa Romeo contacted the head of the design house Giuseppe Bertone or as it was called “Nuccio” and ordered three concept cars for an extensive study of the impact of drag on the vehicle. The idea was to create cars with the lowest possible drag coefficient. Cars called BAT (Berlinetta Aerodinamica Tecnica or “Cars with improved aerodynamics”) were built by the well-known designer Franco Scaglione on the chassis of the Alfa Romeo 1900.

Every year between 1953 and 1955 at the Turin Motor Show Alfa Romeo and Bertone exhibited the concepts BAT 5, 7 and 9. The cars succeeded in achieving the set goal, reaching a drag coefficient of 0.19, which is a success even by modern standards. For each of the machines, Alfa Romeo provided a five-speed transmission and a powerful four-cylinder DOHC engine that produced over 90 horsepower, ample enough to accelerate the car to a top speed of 201 km / h. 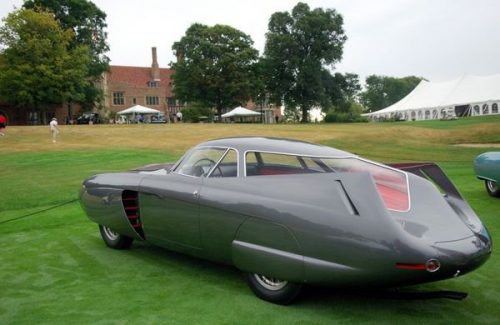 The first of a series of concept cars BAT appeared BAT 5, first exhibited at the Turin Motor Show in 1953. The basis of the design of this model with side windows at an angle of 45 degrees relative to the body of the car and a large windscreen, which fit perfectly into the almost flat roof, were aerodynamic regularities. The shape of the forehead sought to eliminate the problem of rupture and distribution of air flow at high speeds. The layout also aimed to put an end to any additional resistance created by turning the wheels, as well as to provide a structure that allows you to create as few air twists as possible. The most surprising part of the car was a tail along the rear windshield, separated by a thin body pillar, and two fins, tapering upward and slightly inward, for a very aesthetic finish. Bertone solved the problem of aerodynamic stability by creating a car with an excellent Cd penetration index of 0.23. 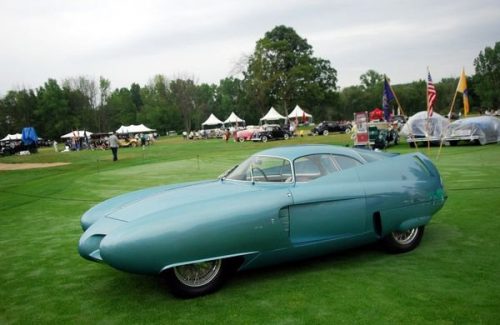 BAT 7, the second in terms of BAT, was demonstrated a year later at the Turin Motor Show in 1954. It traced stylistic, slightly modified features, inherited from the previous model. The front end of the car, painted in pale blue metallic, was lower than that of BAT 5, the convex dorsal fin ran down from the roof to the bisected conjugated curved rear body windows. This glass was almost shielded from the light by high, inside curving cut fins. Hidden headlamps and accurate streamlining around 16-inch spoke wheels allowed BAT 7 to reach an incredibly low Cd value of 0.19, which so far has not been achieved by any serial car. 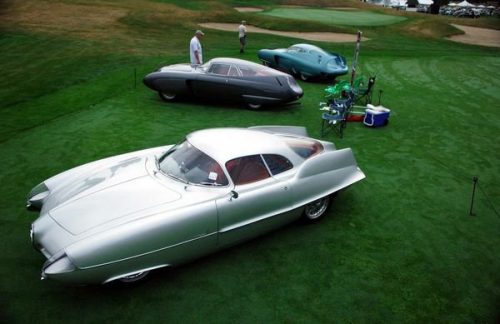 BAT 9 is the third and final BAT car manufactured and displayed at the Turin Motor Show in 1955. Compared to other bats, it is more like modern models of Alfa Romeo and, according to most experts, is considered the most beautiful of them, although there are some who disagree. BAT 9 put an end to the catchy lines of the wings of previous models, claiming cleaner, soft lines. The caudal fins, which in models 5 and 7 had the appearance of a real wing, were shortened to two small metal plates, as well as on serial American and some European cars of the time. Bertone has transformed the highly creative decoration of previous BAT models into a realistic design, discarding the extremes of other designs.

These three models, designed by Franco Scaglione, had very advanced features for their time. They represent three important points in automotive history and after many trials and tribulations became the property of a passionate collector from Las Vegas. Today they are considered one of the most valuable collections in the world.

ALFA ROMEO BAT 11 – THE AUTHOR OF A FAMOUS TRIO 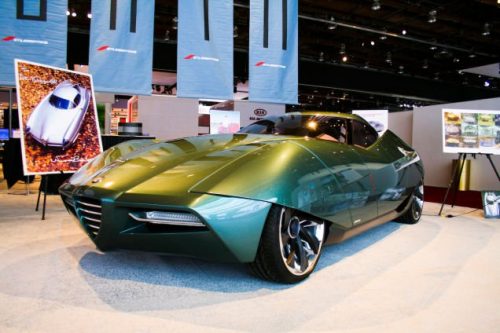 After more than 50 years, the latest BAT-BAT 11dk model appeared, making its debut in Geneva during the 2008 auto show, although not on the show itself. It was built on the order of passionate enthusiast Gary Kaberle from Michigan, who presented the initial sketches of Bertone for the realization of his dream – a modern interpretation of BAT 9, which once belonged to him. Kaberle owned his BAT 9 for almost 30 years before being forced to sell it to fund the treatment of his wife Deb, a cancer sufferer. The abbreviation dk in the name of the car meant the initials of her name. The designer of the original BAT also fell ill with the same illness, “so we are doing something special, dedicating a car to the wife and the Scaglione family,” declared Kaberle at the Detroit Motor Show in 2009.

With dimensions of 4.9 × 1.9 × 1.2 meters BAT 11, mounted on the chassis of the Maserati GT, won the reputation of a sports car of the new millennium. With the Maserati V8 engine, it towered on 21-inch spokes, slowed down by Brembo brakes and shod with Pirelli tires. The scale model of the prototype was precisely tuned on the basis of aerodynamic tests conducted at the Department of Aeronautics and Space Technology at the Polytechnic Institute of Turin.

The car has some design signals from the originals, such as conical fins, streamlined shape and closed wheel arches. The most famous of them are the huge curved rear wings of BAT 7. Like the three concept cars, it also has a rounded greenhouse, excellent proportions and hints at the art deco style with elements of futurism. One of the most unique features is the movable wings, which create a clearance for the front driven wheels. In the rear part there is a suspended spoiler running in length with a special spacer system. 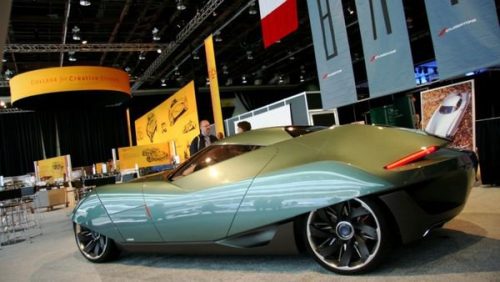 The sides of the car are very simple, almost primitive and draw attention to two features that emphasize the sporting character of the car: low windows combined with high waist and heat absorbing films optimizing cooling of the brakes. Doors open in a forward direction and slightly upward, opening access to a two-seater cockpit, trimmed simply and elegantly in unison with the BAT concept. The instrument panel is made of wood and bent at the bottom of the driver’s side.

When viewed from the front, the model clearly resembles Alfa Romeo – a long hood, very smooth at the top, descends to a sharp sloping front, reminiscent of the model designed by Bertone for Alfa Montreal. In the center is a typical triangular shield with a round logo on the top of the hood, from which stretch 3 horizontal lines – the distinctive “triptych” of the design of the Alfa Romeo front end with the air intakes accommodating the OSRAM LED lighting system.

Unfortunately, BAT 11dk is just a mockup with operating doors, interior and transmission. Gary Kaberle still hopes to find someone with a couple of million dollars to use the design.