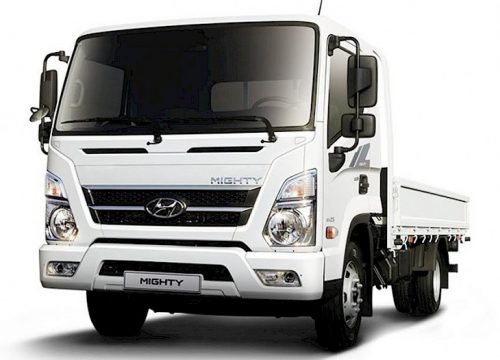 Hyundai Mighty – compact trucks with a mass of 3.5 to 7.8 tons of Hyundai South Korean company.

The export variants of the Mighty series were Hyundai H250 and Hyundai H350 with Diesel Mitsubishi 4D31 2.7 L with a capacity of 100-115 horsepower.

In 1994, the model was upgraded (front lights were rectangular, radiator latches changed, and other minor changes).

The first generation cars were manufactured before 1998 and were replaced by a new model.

The second-generation Hyundai Mighty was introduced in 1998 and represents a modernized version of the first generation, but unlike the first one, it is an independent development by Hyundai. For export to some countries cars are supplied under the name Hyundai HD65, Hyundai HD72 and Hyundai HD75. The expansion of the production of these cars allowed the commissioning of another plant in Wangju, near Seoul, covering an area of ​​600,000 m².  From 2000 to 2004, the car was also marketed under the name of Kia Pamax, in the USA the model was sold under the name Bering LD.

Since October 2004, an upgraded model called Hyundai e-Mighty with a changed radiator grille and headlights has been proposed. For export cars are offered under the name Hyundai HD65, Hyundai HD72 and Hyundai HD78.