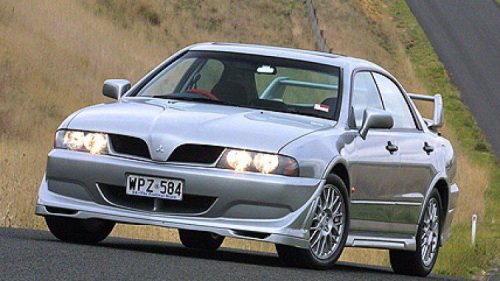 The Magna was developed as a replacement for the rear-wheel-drive model of the Chrysler Sigma. Earlier in the lineup of the Australian branch of Mitsubishi was a large family car in the form of a six-cylinder Chrysler Valiant, who inherited MMAL after the operation of buying Chrysler Australia in 1980. Nevertheless, MMAL decided that the width of the car will be a decisive factor for Australian buyers, who traditionally prefer large cars. As a result, in order to compete more effectively against large rear-wheel drive rivals, namely Ford Falcon and Holden Commodore, former Chrysler engineers who switched to MMAL developed a wider mid-range car typical for the Australian market. This model was based on the fifth generation of Japanese front-wheel drive Mitsubishi Galant (Sigma), released in August 1983. Engineers made changes to the Galant body: expanded by 65 mm and reinforced for Australian road conditions. To emphasize the size and advantage over other mid-range Mitsubishi cars, it was named Magna – derived from the Latin word Magnus, which means “big, important, great”. This approach proved successful for the Australian market, making Magna a strong competitor to Toyota Corona, Holden Camira, Nissan Bluebird, Ford Telstar. The expansion of the platform also affected Honda, Mazda, Nissan, and Toyota, which did the same for their mid-size models in international markets, for example, in the case of the wide-body Toyota Camry (XV10) 1991.