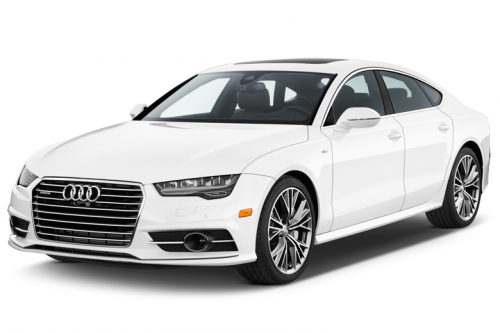 Audi A7 Sportback (body code – 4G) – five-door fastback class Gran Turismo, produced by AUDI AG, on the A6 platform, is positioned in the segment below the Audi A8. Its main competitors are Mercedes-Benz CLS and BMW 6 Gran Coupe. The Federal Motor Transport Office of Germany positions A7 in the upper segment of the middle class. Sports versions are S7 and RS7.

The premiere of this model took place on July 27, 2010 at the Munich Pinakothek of Contemporary Art.

The car is based on the concept Audi Sportback Concept, while its design is much more conservative and focuses on other models of the brand Audi. The same style was continued by the Audi A6 C7, which was launched in 2011. Unlike the body of the saloon car is almost completely borrowed from the concept car. The average drag coefficient Audi A7 is 0.28. The rear spoiler automatically retracts at speeds of 140 km / h. In 2014, Audi AG introduced the A7 (on the market since 2015) with an updated design of optics and improved technical characteristics.

In the A7 model, for the first time, a projection display is offered as an optional equipment, which allows you to project the recommendations of the navigation system onto the windshield. As an alternative to displaying such information, a 6.5-inch display is installed in the front panel.

By the start of the sale, four 4-cylinder engines are offered: petrol 2.8 FSI with 204 l. from. and 3.0 TFSI with a capacity of 300 liters. s., as well as two diesel 3.0 TDI with a capacity of 204 liters. from. and 245 liters. from. All-wheel drive models are equipped with a gearbox with a double clutch S tronic. Front-wheel drive models with a 204-liter engine. from. equipped with a continuously variable automatic multitronic transmission.