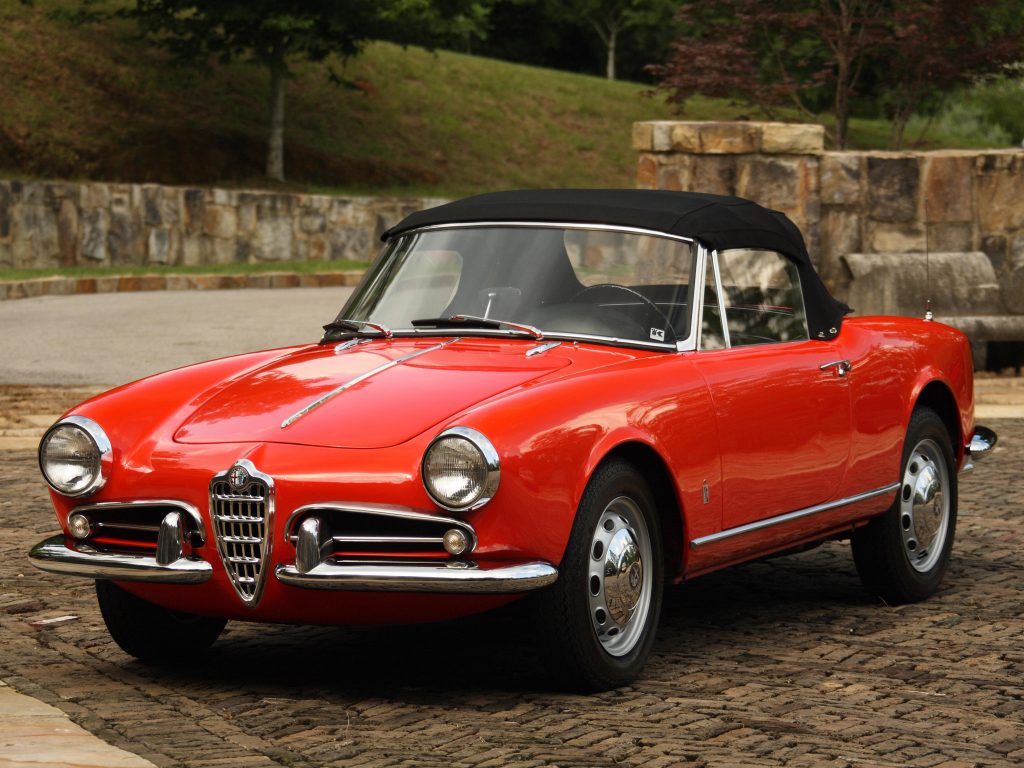 Alfa Romeo Spider (Series 105/115) – a car with a body type “Roadster”, produced by the Italian company Alfa Romeo from 1966 to 1993. (190 Spider cars were released with the label “1994 Commemorative Edition” for the North American market). The car with a classic design was produced for almost three decades with minor changes in appearance and technical part. The spiders of the first three series were assembled at the Pininfarina plant in Gruljasco, the fourth-series cars at the plant in San Giorgio Canavese. The last Spider was released in April 1993, and was also the last rear-drive Alfa Romeo, until the release of the Alfa Romeo 8C Competizione. On May 23, 2012, Fiat announced the work on an agreement to develop a new Spider by 2015 in conjunction with Mazda on the Mazda MX-5 platform. The agreement was signed on January 18, 2013.

The first presentation of the car as a prototype took place at the Turin Motor Show in 1961. Nevertheless, the success of existing models and the economic problems that Italy faced at the time led to the fact that the first pre-sale cars left the production line of the Pininfarina plant only at the end of 1965.

Spider, based on the platform of the Giulia series 105, was presented at the Geneva Motor Show in March 1966. The name “Duetto” was chosen for the initially unnamed model based on the results of the competition held in Italy. [8] For the design of the body was answered by the Italian company Pininfarina, while Spider was the last model that the founder of the company Battisto “Pinin” Farina personally was engaged in. The design director in Pininfarina at that time was Franco Martiningo. Pininfarina was also responsible for the production of the body type “Monocoque”, developed in accordance with relatively new at the time, the principles of having special crumple zones in the front and back of the car. The engine – 1570 cm3, 4-cylinder, Twin Cam, had a twin Weber carburettor and a power of 109 hp. (81 kW). The car had a 5-speed manual transmission, disc brakes and an independent front suspension. The price at the time of production launch was 2.195.000 lire in Italy. In the US, the car sold for 3.950 dollars (for comparison, Lotus Elan cost 3.991 dollars, MGB – 2.607 dollars.) In the UK, the car at a price was comparable to the Jaguar E-Type.

The original spider “Duetto” was produced in 1966-1967. At the end of 1967, he was replaced by the 1750 Spider Veloce with a 118 hp engine. (88 kW) with a volume of 1779 cm3. In Europe, it was equipped with two dual carburettors, while models for the North American market were equipped with the SPICA (injection molding injection) system (Società Pompe Iniezione Cassani & Affini) (from the 1969 model year). Also, the suspension, brakes, the electrician have been modified, the wheels and tires have been replaced – although the exterior of the car looked almost the same. Visible changes: the changed position of the rear-view mirror on the door, and other signs on the rear. In the course of production, the forward lights of the followers also moved forward. The official name of the model is “1750 Spider Veloce”, the name “Duetto” has not been used since.

The new Spider 1300 Junior with an engine capacity of 1290 cm3, rated at 89 hp. (66 kW) was introduced in 1968. It lacked some of the parts that were on the model 1750, such as plastic headlight headlights, brake booster, wheel hoods and opening side windows. The Junior version had a black-colored lower section of the front bumper.

On the Spider of the first series went the main character of the film “Graduate” (1967) Ben, whose role was played by Dustin Hoffmann.