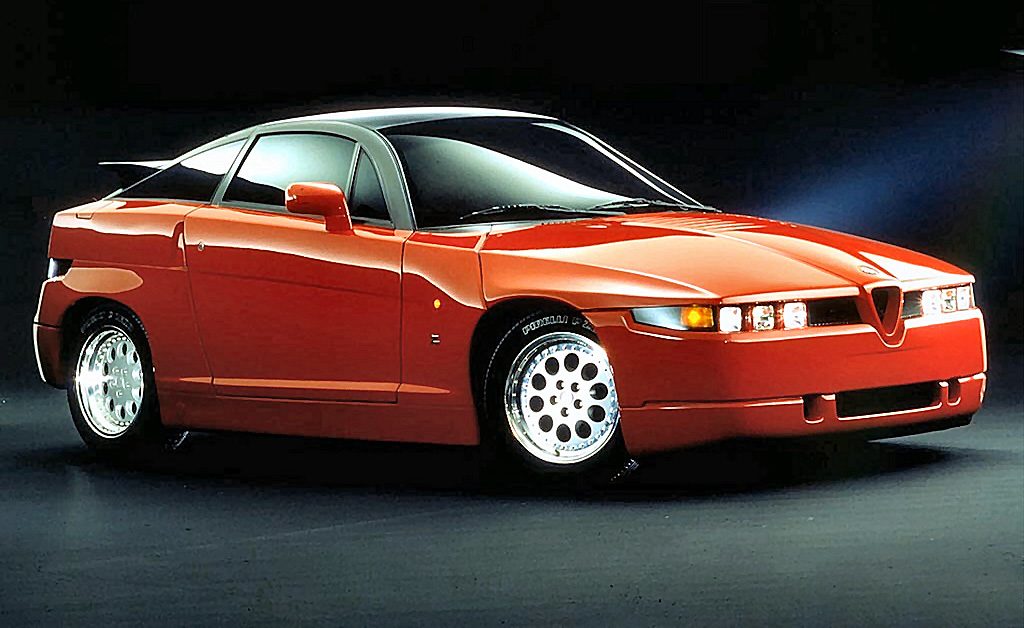 In the late 80’s in fashion was an angular style. BMW M3 E30, Lancia Delta Integrale, Audi Quattro – cult sports cars of that time were painted by people who were not indifferent to cubes from children’s designers. But all these samples of “cubism” in car design just faded against the background of the concept car Alfa Romeo ES30, presented at the Geneva Motor Show in March 1989.

Flat sidewalls, a chopped front end and a high line of windows combined with short overhangs and a low roof surprised the audience. The Italian press dubbed the car Il Monstro (“Monster”). However, as many auto journalists have noted, “to be a star, you do not have to be beautiful.” And this car, despite its controversial appearance, really was a star: from those wishing to become the owner of the serial ES30 there was no release, which turned out to be very useful for Alfa Romeo, which was going through bad times.
After financial turmoil in the 70-80-ies Alfa Romeo in 1986 entered the empire of Fiat. The following year, the president of the Italian auto giant, Vittorio Gidella, suggested that the sponsored company create a car that would become a demonstration of Alpha’s abilities and remind the world of the glorious sporting past of the famous brand. The project was named ES30, which was deciphered as the Experimental Sportcar (experimental sports car) with an engine capacity of 3.0 liters.

The exterior of the car was immediately worked by three groups of designers: Zagato, the current chief designer of the Audi Group, Walter de Silva and Alberto Betheli from the Alfa Romeo style center and Fiat’s own design center in the person of Robert Apron (creator of Citroen SM) and chief designer of the concern Mario Maioli.

The victory was won by the project, proposed by Fiat. Sketches of the Opron (with 6 headlamps in the style of the SM model) were completed by the young designer Antonio Castellana, and Zagato, whose Milan plant was to produce a production version of the car, had a hand in the design of the front and rear of the car, adding its own logo in the form of the letter “Z” on the front fenders.

Work on the model, which later received the name SZ, began in July 1987. In the creation of the machine from the very beginning, computer modeling was used, so the first prototypes were ready in a year and a half. To save time and money it was possible and due to use of knots and units from other models of Alfa Romeo.

Body panels made of Modar (modified acrylic resin), reinforced with fiberglass, were attached to the chassis of the Alfa Romeo 75. The “closed” aluminum roof of the body was distinguished by an exceptionally high rigidity. Tests in the wind tunnel made it possible to reduce the drag coefficient to 0.3, which is very noticeable for this, not the aerodynamic body itself.

The Alfa Romeo AR61501V6 fixed length alloy 2959 cm3 was borrowed from the top version of the 75th model – together with the increased friction differentials and the gearbox in the block with the main pair, which ensured the weighting of 56/44 front / rear. The motor received new intake and exhaust manifolds, an air filter of increased diameter and improved fuel injection of Bosch Motronic. Thanks to this V6 produced 205 hp. at 6200 rpm and 245 Nm of torque at 4500 rpm, accelerating the Alpha to 100 km / h in 7 seconds. and to a top speed of 250 km / h.

However, the main advantage of SZ was to be its manageability. The suspension of the car was developed by Giorgio Piant, who created the rally Lancia and Fiat in the 70’s and 80’s. In fact, the SZ was an adapted suspension from racing Alfa Romeo 75 Group A championship IMSA.