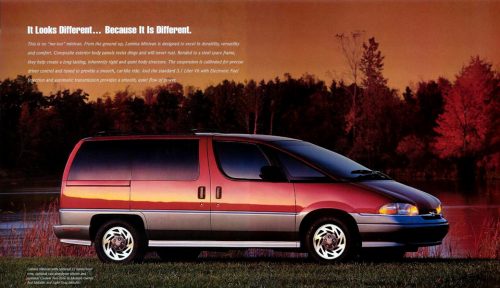 Chevrolet Lumina APV – American minivan, which was produced by General Motors from 1990 to 1996. in 1994, the prefix “APV” was removed from the name of the car. This model is also known as Lumina or Lumina Minivan. In addition, the car is completely identical with the brothers Pontiac Trans Sport and Oldsmobile Silhouette. In the line of Chevrolet cars, this model was located between the rear-wheel drive Astro and Chevy Van.

The first attempts to create a minivan from General Motors for the competition of Dodge Caravan and Plymouth Voyager were the Chevrolet Astro and its clone GMC Safari. All these attempts resulted in the failure and full domination of Chrysler in the minivan markets in the late 1980s. Therefore, another attempt was made to create a new minivan.

Lumina APV was introduced as part of a line called Chevrolet Lumina, which also included Chevrolet Lumina, Lumina Coupe, Lumina Euro Coupe, Lumina Z34 Coupe, Lumina Sedan, Lumina Euro Sedan and Lumina APV Minivan. The name “APV” stands for “All Purpose Vehicle”. The car was a universal vehicle with many innovative features and, in addition, an unusual design that fished in memory of many potential buyers of minivans. As a result, consumers were confused and wondered how these two different cars had the same name.

This car is built on the platform of GM U. The successor to Lumina APV was Chevrolet Venture.

The model was manufactured at the now-idle plant in Northern Tarrytown. The platform of the car called U-body consisted of a frame made of galvanized steel, which was wrapped in composite plastic panels made of fiberglass. These panels were resistant to rust, minimal cuts and dents. This technology was developed for the Pontiac Fiero and was widely used on the Saturn line of the General Motors division.

Lumina APV was available with seven seats, with five identical lightweight (15 kg) rear seats, which in turn were easily removable and interchangeable. In 1994, an add-on child seat was added to the list of options, which made it possible to separate the adult and children’s zones and then secure the seats in special floor spaces.

Lumina APV for commercial use was provided by a three-seat minivan equipped with rubber floor, instead of the usual carpet. The rear seats were completely removed, and instead of the rear windows, solid plastic panels were used to match the body color. Despite the completely identical body, this commercial model was labeled as “APV” without the “Lumina” logo on the outside of the car.

During production, special versions were available in the car’s configuration, which included air conditioning and special gas shock absorbers at the rear of the car to maintain the height of the car regardless of load and weight. Special sets with hoses for pumping wheels, inflatable mattresses, as well as kits with sports equipment and the like were also available.

In 1995, the remote control function for the rear side sliding door was added. This was the innovation of General Motors. Now this function is used in any commercial vehicles or buses to this day.

For the 1994 and 1995 model years, traction control functions were available on modifications from 3.8 liters. the V6 engine.