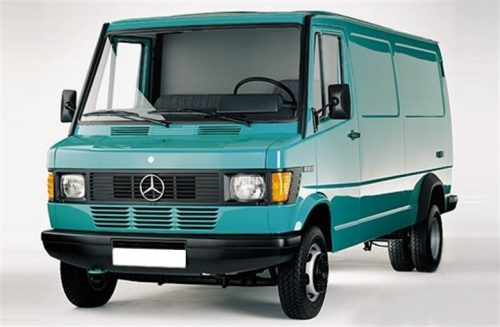 The book details all the operations to repair the units and assemblies of the Mercedes Benz.

The large family of small tonnage cars under the general index of the T1 series Bm 601 (models with a total weight of up to 2.9 tons) and Bm 602 (models with a total weight up to 3.5 tons) debuted in 1977. The number of released modifications is extremely high. All-metal wagons, “combi” (3-5 passenger seats), minibuses, cargo and passenger cars with single or double cabs, chassis for the installation of bodies and special equipment, and even dump trucks with three-way body unloading. The variety of designs T1 is expanded by three variants of base length (3050, 3350 or 3700 mm) and two – the height of the roof (2240 ​​and 2525 mm). Depending on the load capacity and, accordingly, the full weight of the rear wheels can have single or double buses. If you add a wide range of motors to this set, take into account the range of transmission numbers of the main gear plus the possibility of setting the automatic transmission, then the total number of possible options will approach 500.

The volume of the cargo compartment Mercedes-Benz T1 varies from 7 m³ to 11.4 m³, and the load-carrying capacity – from 825 kg to 2580 kg. Passenger versions of T1 accommodate up to 13 people, including a driver. The total mass of some modifications T1 reaches 4.6 tons.

For 18 years, the appearance of the car practically did not change. The idea of ​​the exterior design of the T1 is standard for utilitarian models of the Mercedes-Benz period of 70-80s: the charm and elegance of today’s Sprinter they are not observed. The semi-layered layout, straight lines of the body panels and the main optics of strict forms do not look like avant-garde. Anticorrosion resistance of the car at a high level. Thresholds, welded sections of the body and galvanized frame. The wheel arches and the bottom of the van are protected by a special elastic coating, which also performs the function of the noise-absorbing material.

Salon Mercedes-Benz T1 – the kingdom of asceticism and minimalism. The finishing materials are made in the spirit of the seventy of hard plastic. Due to the semi-layered layout and the desire for maximum compactness, landing in the cabin T1 turned out to be not very comfortable, mainly due to high wheel arches. In addition, there is no enthusiasm and ergonomics of the driver’s seat: the front seats have a small number of adjustments. But the quality of the assembly on the high and the heating system is quite effective. The front compartment in the modification with the body of the “combi” can be separated from the load or integral, or low partition. Standard fittings for front chairs are equipped with protective, steel partitions. Passenger modifications are quite spacious – the number of seats varies from 7 to 12, and there are instances, both with separate chairs, and with paired ones. Transform salon T1 from passenger to cargo – it is a very laborious task. Seats are attached to the floor with large bolts.

T1 was equipped with side doors from both sides (in the early versions it is possible to find and swinging) with the dimensions of the opening 1100×1478 mm and the rear bivalves, whose turning angle is regulated with the help of clamps (maximum 270 °). For standard modifications of vans and minibuses, the load height is 690 mm. By order on T1 set a small step behind to facilitate loading-unloading and facilitate entry into the cabin. The load of long and bulk cargoes at T1 is not difficult due to the high doors.

Under the hood T1 released before 1982, you can meet either a 2.5-liter 85-strong petrol engine (with a carburetor), or a pre-chamber 72-hp diesel engine with a working volume of 2.4 liters. The latest powertrain is not very demanding for fuel quality and is relatively economical (15-17 l / 100 km). Installation of these motors lasted until 1989. After five years of production, they added a 3.0-liter five-cylinder diesel (OM617) with a capacity of 88 hp But on this the designers did not stop. From 1989 to 1995, up to the withdrawal from production, the T1 was completed with a 2.5-liter gasoline engine (with an injector) with a capacity of 105 hp, as well as two diesel engines – a working volume of 2.3 and 2.9 liters , with 79 and 95 hp respectively Options for gear boxes are traditional for the 80’s – or five-step “mechanics”, or “automatic”. Since 1989, in an effort to increase the active safety of T1 and its road sustainability as an option, ABS has been proposed.

The Mercedes-Benz T1 frame is made of a complex W-shaped steel profile, which is welded to the floor of the body. Thanks to this design, the frame can withstand high loads, which can not be said about the front suspension. The front of the suspension is two-hinged. Dependent rear suspension suspension is a traditional solution for Mercedes trucks.

The design was so successful that only in 1995, T1 was removed from production, and replaced by him a modern Sprinter.

One thought on “Mercedes-Benz T1 PDF Workshop and Repair manuals”