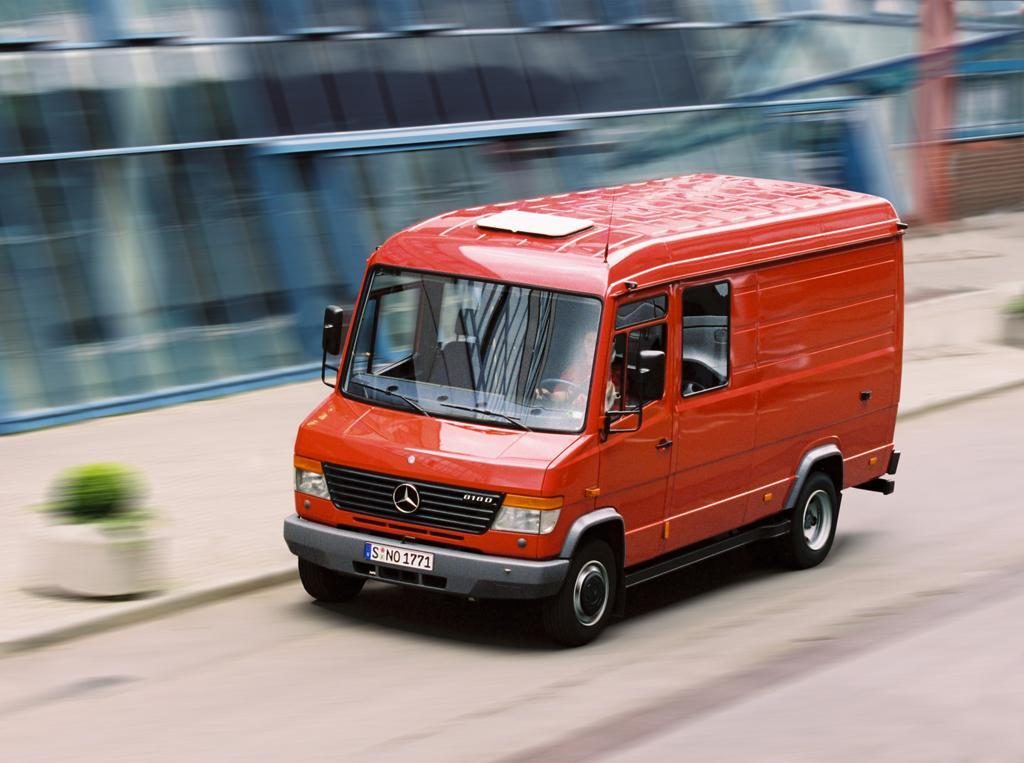 Medium-tonne trucks and buses “Mercedes-Benz Vario” replaced the popular “T2” model in 1996. The “Vario” minibuses are virtually identical to their predecessors in the “T2” series of the early 1990s – the same frame structure, the same variety of bodies mounted on a chassis of varying lengths. The only notable difference is the more modern headlights and a new decoration of the radiator grille. But compared to the predecessor on the “Vario”, in addition, the 7th series disappeared. Execution is made with a standard or high roof. The total mass ranges from 4.8 to 7.49 tons, which is offered in numerous implementations with a wheeled formula of 4×2 or 4×4 (the letter “A” – the name “Allrad”, the full drive) and several sizes of the wheelbase (3150-4800 mm) are added. . For the Vario range, the following notation is selected:

The program features two types of diesel engines: an inline 5 cylinder OM602DE LA with a working volume of 2874 cc with a distributor fuel pump of the type “VE” manufactured by “Bosch” with EDC (English Electronic Diesel Control) and an inline 4 cylinder «OM904LA» with a working volume of 4249 cm3 with pump units Unit Pump (English UPS or GND PLD – Pumpe-Leitung-Düse), both with direct injection, turbocharging and intermediate cooling of the inflow air. Automobiles with engine “OM602DE LA” 2.9 liters (“Vario 512D / 612D / 812D”) in the standard equipment had 12 Volt onboard electrical system and aggregated with a 5-speed manual gearbox type “G28-5″, and with the engine ” ОМ904LA »4.25 liters – 24 Volts, and 5-stage boxes of production« ZF »type« Ecolite S5-42 », own 6-step boxes« G56-6 »and« G6-60 »or automatic transmissions« Allison 1000 “and” AT542 “with electronic control. In the standard equipment, the 5th series was equipped with wheels with 15-inch landing gear, 6th series – 16 inches and 8-inch – 17.5 inches.

To fulfill the specific requirements of the customer there is an additional equipment – comfortable seats, air conditioning, heater, as well as more than 100 serial and special colors. For heavy-duty operation, a four-wheel drive version with locking of the rear and interaxial differentials and a smaller transmission gear unit (model “813DA-818DA”) is offered.

Since September 2000, engines Vario 614D / 615D / 814D / 815D began to install engines complying with Euro-3 emission standards. In 2003, the most powerful modification of the “818D” with a 177 hp engine appeared, and in 2006 the power units reached the Euro 4 standard and received the BlueTec4 prefix, followed by engines that meet the requirements of Euro 5 AdBlue® system on urea solution and the name “BlueTec5”.

All Mercedes-Benz minibuses are provided with a suspension bracket on parabolic springs, a pneumatic suspension is available on request from the rear, with all disc ventilated brakes manufactured by the manufacturer “Wabco / Perrot” for the 5th series and “Lucas / Meritor” for the 6th and 8th series and steering gear with a hydraulic booster. The new “Vario” has a two-circuit braking system with a hydraulic or pneumatic actuator equipped with ABS and ALB systems. The interior panel of the cabin has changed the instrument panel, the driver’s seat is adjustable in all directions. Improved sound insulation, a new heating and ventilation system. To increase safety, a driver’s airbag and three-point belts are installed. In addition to passenger versions based on a metal-wagon, Vario produced models of buses such as a small tourist / flight “Mercedes-Benz Medio” or an airport “Cobus 2400”, and other studios (“Auwerter”, “VDL Kusters” , “Omnibus-Trading BV”, etc.) with their bodies. Also, on the basis of Vario, a single-axle tractor “810DT” with a cabin, an OM 904 LA engine for 102 hp, an Ecolite S5-42 “ZF” gearbox, a gearbox and a front axle drive later replaced by “813D” with a capacity of 129 hp On the basis of the all-wheel drive version, with a 6-speed GC6-type gearbox, but also only with the front driving bridge, the rear part with one or two supporting axles, equipped with a farmer, commercial or other specific equipment, such as, for example, models from the firm “Ruthmann”.