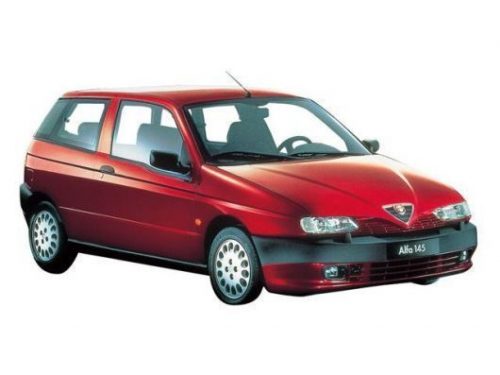 Alfa Romeo 145/146 – three- and five-door hatchbacks of small family class, produced by Alfa Romeo from 1994 to 2001. For the first time the cars were presented at the 1994 Turin Motor Show. Production 145 began in July 1994, 146 – after 6 months. Unlike the three-door version, the five-door had a small luggage edge, which makes it possible to classify its body type as a liftback. The models are built on the Fiat Type Two platform (Tipo Due) in conjunction with the Fiat Bravo / Brava (respectively, 3 and 5-door versions) and were produced simultaneously with them as their more luxurious options.

The design model in many respects inherited from Alfa Romeo 164, however unusual bumper were made for the sake of not design, but safety. The model was positioned as a continuation of the Alfa Romeo 33 series. When entering the sale year hatchbacks were equipped with 4 types of four-cylinder engines – horizontally located opposed gasoline “atmospherics” volume of 1.4; 1,6 and 1,7 liters, and 1,9-liter in-line turbodiesel. A year later, the flagship models Cloverleaf (145) and Ti (146) received a 2-liter engine from the older model Alfa Romeo 155. In 1997, all the opposing engines that were mounted on a previous model and had a rather large mass were replaced by more modern ones in-line four-cylinder engines from the Twin Spark series [6] (engines had an ignition system with two candles per cylinder), the turbodiesel engine and interior were also updated, ventilated front discs appeared, and the driver’s airbag was installed in all lektatsiyah. In 1998, a slightly changed 2-liter unit, and also a new Junior equipment with a slightly modified interior and exterior.

As a transmission, only a 5-speed manual gearbox was used. The most powerful versions (1,8 and 2,0 l) had more responsive steering “quick-rack”, and also more rigid suspension.

In the basic equipment, the car already had electric windows, mirrors with electric drive, anti-theft device, central locking, power steering, airbag and ABS; For a surcharge, you could get air conditioning, fog lights and headlight washers. The most expensive versions had a hatch on the roof and leather trim of the seats, steering wheel and gear lever [9]. Appearing later and playing a big role in sales, Junior equipment additionally had belt pretensioners, a fire fighting system and a rear spoiler.

In 2000, the model was subjected to a small restyling, in particular a bumper, mirrors and door handles were painted in body color.

The 145/146 model, like the other models of the company, was not very reliable and often fell into the ratings of the most unreliable cars, in particular such an authoritative organization as the German Vehicle Technical Control Association (VdTUV). However, due to the fact that the 145/146 are built on the same units with the Fiat Bravo / Brava, the secondary market still has quite a few spare parts for the car.