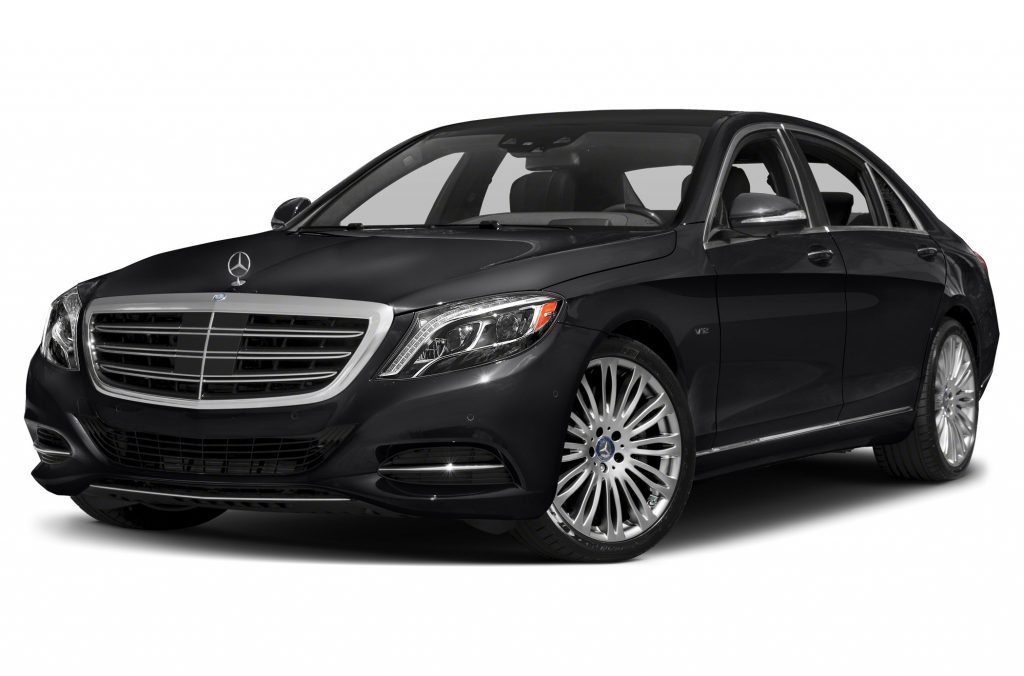 Mercedes-Benz S-Class – the flagship series of representative cars of the German company Mercedes-Benz, a subsidiary of the concern Daimler AG. It represents the most significant line of models in the hierarchy of trademark classes. The first representative sedans appeared in the early 1950s, but officially the S-class appeared only in 1972. Currently, the series consists of 6 generations: W116, introduced in 1972 and produced before 1980; W126, which debuted in 1979; W140, produced from 1991 to 1999; W220, which went on sale in 1998 and completed production in 2006; W221, presented in 2006 and assembled until 2013 inclusive; W222, which premiered in 2013.

The S-Class cars debut most of the company’s most advanced technological solutions, including security systems and key features of the company’s interior. In terms of sales, the flagship series is rated as one of the best-selling luxury sedans in the world.

All representatives of the S-class are produced in short- and long-base versions (with the prefix “L”) with gasoline, diesel and hybrid engines in the configurations I4, V6, V8 and V12. Models assembled in Mexico or sold in the US are available only in the version with a long wheelbase. All generations, since the third (W140), have high-performance modifications from the division Mercedes-AMG.

In addition to the sedans, the series also includes coupes and cabriolets. In addition, on the basis of the S-class luxury cars Mercedes-Maybach and limousines Mercedes-Maybach Pullman were created. In 1998, for a S-class coupe, a separate CL-class was allocated, but in June 2014 the company again returned to the original line. In 2016, the first modification of the cabriolet was introduced.

The W116 is the first official representative of the S-Class, which appeared in August 1972. The car was radically different from its predecessor, the exterior design was more manly, but sporty, which will continue on all models of the car until the mid-1990s. 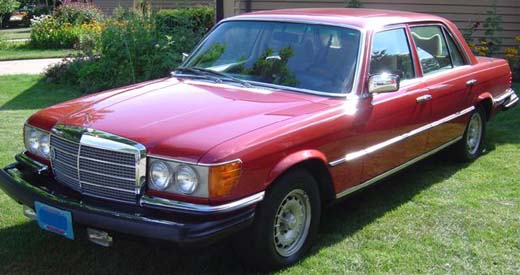 In mid-1980, the production of the first S-class is being completed. A total of 473 035 cars were produced, including 78 256 V116 (including 7380 450SEL 6.9) and 28 634 diesel versions. If we consider that the 1973 Oil Crisis coincided with the launch of the car, the success of production of this scale is particularly impressive, thanks to high quality and exports around the world.

In September 1979, at the Frankfurt Motor Show was shown a car that turned the whole design of the automotive world, and instantly threw in the shadow of its predecessor W116. Externally, the car W126, created by designer Bruno Sacco, had an organic design that brilliantly combined the sporting character and retained a prestigious appearance. The cars were equipped with airbags, pretensioners of belts and many other innovations, which were later switched to other cars. 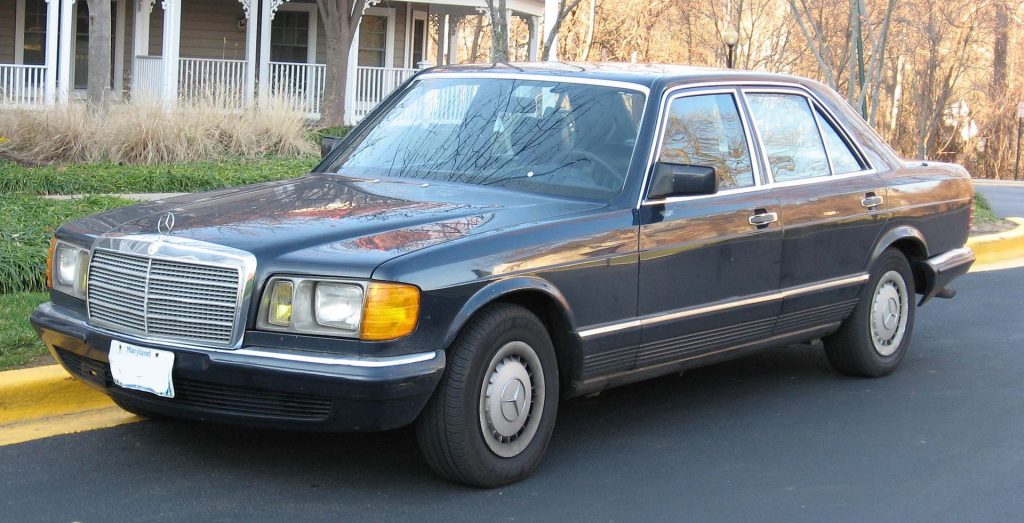 Initially, the range of models included 280S and 280SE with a straight six-cylinder engine and 380SE with V8. In 1980, they were supplemented with 500SE, as well as long-throw models 280SEL, 380SEL and the flagship 500SEL. There was also a turbodiesel model for export to North America – 300SD. The popularity of the second-generation S-class, including long-wheelbase versions, in all markets was so high that in 1981 it led to the cessation of the production of the representative “six hundredth” W100 limousine. In 1985, cars underwent a major renovation, during which the last carbureted model of the S-class 280S was removed from the model line. The line-up was opened by the 300SE and 300SEL, followed by cars with V8 420SE / SEL, 500SE / SEL and the new flagship 560SE / 560SEL. And the US market also came out 300SDL (until 1987 in 1990 there were 350SD and 350SDL models).

The W126 series has become the most successful in the entire S-Class line in terms of the length of production and the number of copies built, despite the fact that it has been replaced by the next three generations. The series was produced until 1991 (500 and 560SEL up to 92nd) and for 12 years 818 105 sedans were produced.

In March 1991 at the Geneva Motor Show debuted the largest in the history of the S-Class W140 series. The car was distinguished by a sensational amount of the most advanced technical innovations: from double-glazed windows to the rear antennas. But the main advantage of the 140 series, in addition to the extensive line of traditional engines, including the inline “sixes” (300SE / SEL) and V8 (400SE / SEL and 500SE / 500SEL), was the first in the history of the famous brand engine V12, installed on the new flagship models 600SE and 600SEL. Thus, the W140 S-Class series became not only the direct heir of the W126 series, but also the legendary 600th W100 limousine (1963-1981). 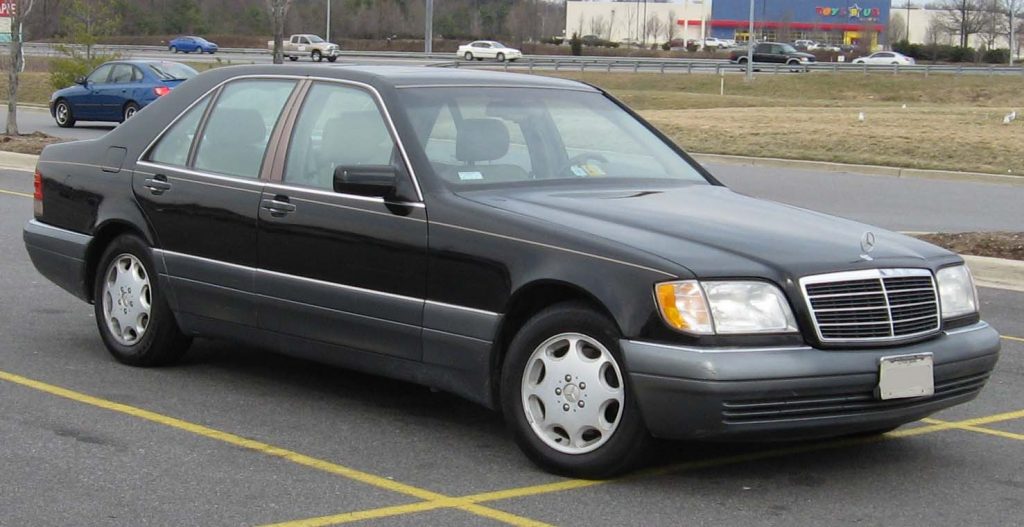 In March 1994 the sedan undergoes restyling. Externally, the car changes the orange panes of the direction indicators to transparent ones, and new lights are received from behind. In addition, the vehicle’s clearance is reduced, and the matte plastic bumpers begin to color the bodywork. Inside the car gets the updated electronics and a new interior. In 1996 series W140 receives such high-tech electronic systems as Parktronic and GPS-navigator. In 1996, the S-class officially separated the coupe, which became a separate CL-class, as well as a new diesel model S300 Turbodiesel.

In total, up to September 1998, 406,710 sedans were produced (including 28,101 “diesel engines”), 218,119 long-haul W140s, and 35,916 “six-hundredths”. World (and especially European) sales of the W140 series could not repeat the success of the predecessor, in part because of the high price and too “evoking” dimensions, which was not welcomed in the politically correct countries of Western Europe, but thanks to the same reasons, this series of Mercedes-Benz cars left a very significant imprint in the newest Russian history of the 1990s.

In the second half of the 1990s, Daimler-Benz, which became part of the transnational group DaimlerChrysler, was forced to reconsider its overly conservative concept of a luxury car (segment F according to the European classification), suggesting that such a car should be the most impressive both in design and in design be the most comfortable, and therefore, heavy and complex in design. Accordingly, a large fuel consumption and expensive maintenance were not taken into account. The company reoriented to a more elegant style, presupposing the preservation of a spacious saloon, saturated with a variety of high-tech devices to increase comfort, but with a more compact exterior dimensions and greater economy due to the simplification of the car’s design. Appeared in the summer of 1998, the S-Class W220 was 300 kg lighter and 120 mm shorter than its predecessor and featured a futuristic body design with rounded exterior details. At the same time, the interior volume of the cabin was even increased, and the saturation of the most diverse electronics only increased. 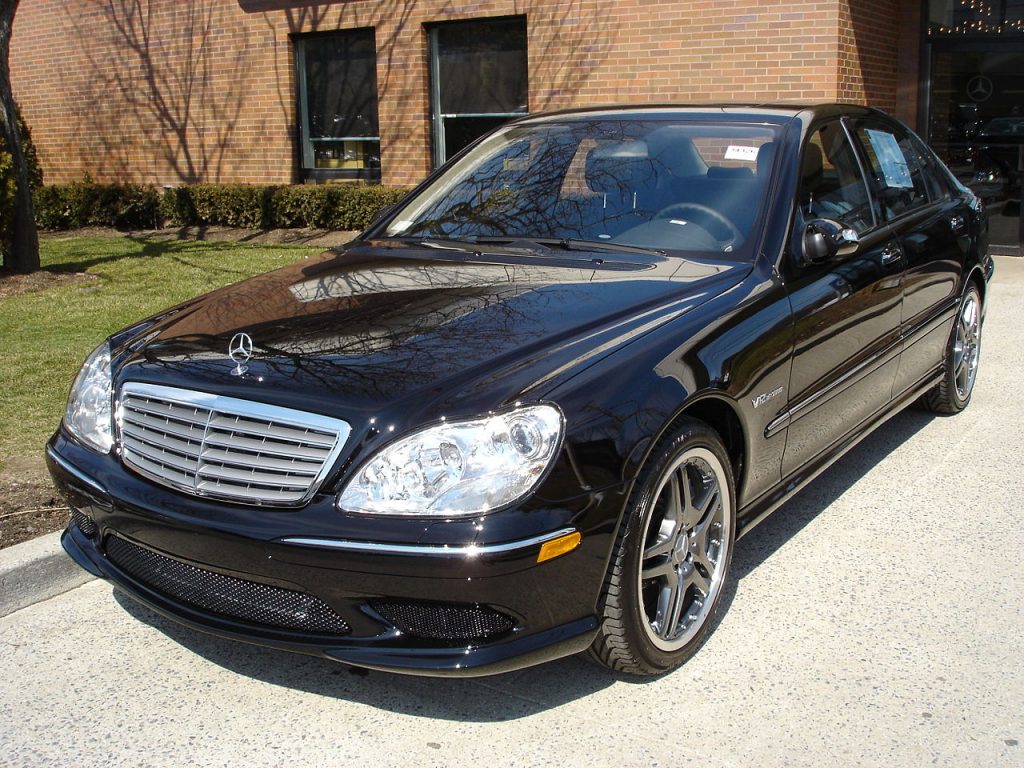 If the former diesel S-class models were initially limited to export to the US market (primarily for the fulfillment of the CAFE fuel standards by the Mercedes-Benz brand), and therefore remained only budget models with limited circulation, realized mainly through fleet sales, then after the emergence of a revolutionary Common Rail technology, the new budget model S320 CDI has become very popular already in other markets and private customers. The diesel lineup was supplemented also by the flagship model S400 CDI with the turbodiesel V8. The W220 series started with V6 – S280 (for export to Asia), S320 (1998-2002) and S350 (2002-2005), V8 continued (S430 and S500) and ended with the flagship V12 on the S600. In 1999, after the purchase of the AMG company by Mercedes-Benz, a sporty model S55 AMG with a forced V8 engine appeared in the company’s lineup. There were also more rare versions with V12 – S63 AMG (2002) and S65 AMG (2004-2005).

In 2000, the concern Daimler AG began to develop a concept of facelift for the car. The upgraded version, which received a more aerodynamic front end and updated taillights, became available to customers since September 2002. In general, with the exception of the installed radiator grille at a more vertical angle, a new transparent headlight housing and lower air intakes on the front bumper, the overall look of the car remained unchanged. In addition, the line of engines was enlarged and the 4MATIC all-wheel drive version with electronically controlled traction appeared, which distributed engine power as follows: 40% for the front and 60% for the rear axle. All cars of the series in the standard configuration got a multimedia system COMAND, and the S600 model was additionally equipped with a navigation system

The W220 series was quite successful: only 485,000 sedans were produced. Nevertheless, the model began to pursue chronic breakdowns of such units as the air suspension, especially on early-production cars (before 2002), which spoiled the reputation of not only this S-Class series, but also caused a sensitive damage to the brand Mercedes-Benz as a whole, which started to noticeably give way to its market positions not only to its compatriot BMW competitor, but also to the Japanese premium brands Lexus and Infiniti.

The S-class in the 221 body was first shown to the public in the fall of 2005. In the exterior of the car (especially in the voluminous arches of the wheels) the motifs of retro-styling and the influence of the Maybach W240 limousine are clearly visible. The package of electronic systems included the most modern and diverse systems of safety and comfort. The lineup included petrol S300 (for export to Asia), S350 with V6, S450 and S500 with V8 (in the USA – S550) and S600 with V12, as well as diesel models S320 CDI and S420 CDI. Top models are two models AMG S63 and S65.

In 2008, due to sharply increased world fuel prices and public interest in “green” technologies, for the first time in the history of the S-Class a hybrid model S400 Hybrid appeared.

In 2009, the W221 series underwent restyling, and also received an optional all-wheel drive transmission and a number of new electronic systems and eco-friendly diesel versions of Bluetec with filters in the exhaust system. Since the end of 2010, new diesel (CDI) and gasoline (CGI) models S250 CDI, S350 CDI and S350 CGI and S500 CGI have appeared in the W221 series.

The sixth generation of the flagship series of S-class executive cars, code-named W222, is available in 2013. The development of design, started back in 2009, was engaged in Robert Lesnik. The exterior of the new model is borrowed from the CLA class and the first generation W212 E-class. The presentation of the car took place on May 15, 2013 in Hamburg, Germany. 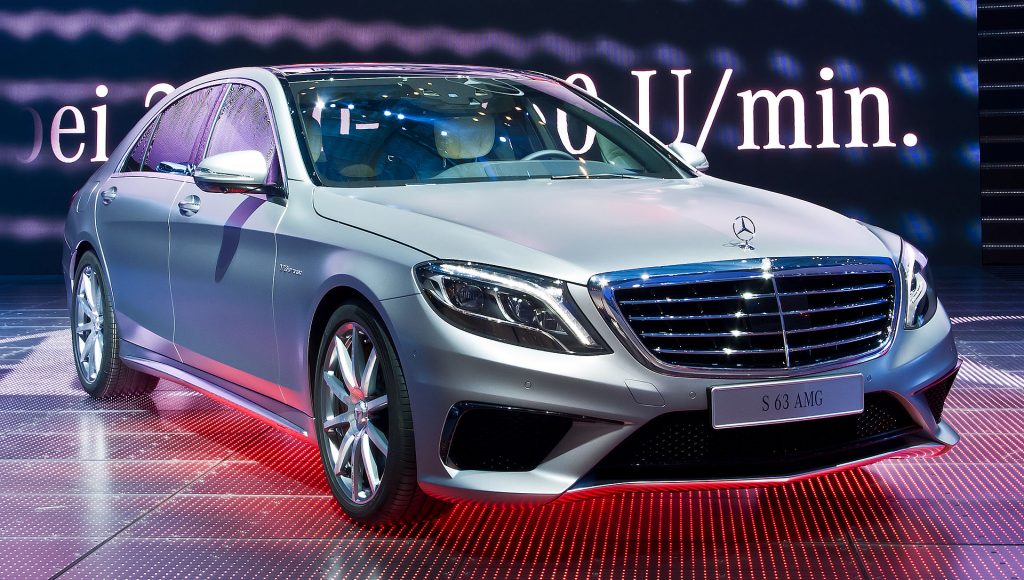 Produced in the body of the sedan (with a shortened and elongated wheelbase), a coupe and a convertible (from 2015). In addition, it has high-performance modifications from Mercedes-AMG in the person of S63 AMG and S65 AMG (both available in sedan, coupe and convertible), as well as the most luxurious version of the limousine – Pullman, assembled by the subbrand Mercedes-Maybach. In addition to the factory division of the AMG, the car is popular with various tuning studios.

In 2017, it is expected to restyling, which will bring changes to the appearance and set of electronic systems of the car. It is also expected to update the engine lineup.

A year after launch in all major markets, Mercedes-Benz has already delivered more than 100,000 S-Class models around the world.

Use of materials placed on this site is allowed only if there is an active link to Сarmanualshub.Сom. Copyright 2017 – 2020 ©. If you have any questions, please contact with us.