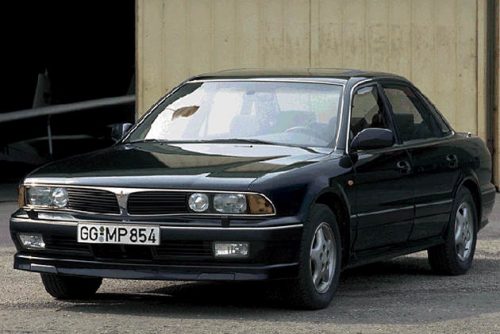 Mitsubishi Sigma – a full-size car of the Japanese concern Mitsubishi, which was issued for the European market from 1990 to 1996. Sigma was made with bodies such as a sedan and a versatile person, while from the moment of its release the car was positioned as a business class car. In Australia, the car was marketed as the second-generation Mitsubishi Magna.

The car received a body with a coefficient of aerodynamic resistance Cx = 0.33, the 3.0-liter V6 6G72 engine had two versions of the 12-valve SOHC with a power of 177 hp and a 24-valve DOHC with a power of 205 hp The cars were equipped with a front-wheel drive and 5-st. mechanical or 4-st automatic gearbox to choose from.

In June 1992, the Mitsubishi Sigma Kombi, manufactured in Australia with a 3.0-liter V6 6G72 SOHC engine with 170-hp engine, was presented.

In the top version of Mitsubishi Sigma has a control system for all wheels.