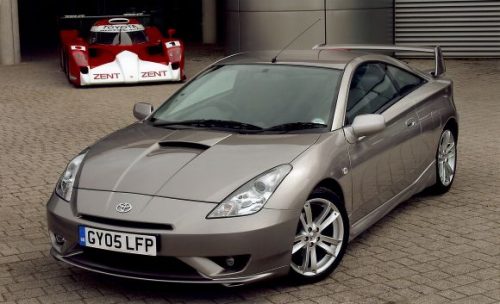 The manual contains detailed information on the verification of the elements of the control system for petrol engines, variable valve timing (WTL), lubrication, cooling, start-up and charging. The instructions for using the engine self-diagnosis system, automatic, ABS, SRS and recommendations for the adjustment and repair of engines, mechanical and automatic transmissions, brake system components (including ABS), passive safety system (SRS), steering and suspension. Detailed electrical wiring diagrams and descriptions of inspections of electrical equipment elements are presented.

Possible faults and methods for their elimination, the associated dimensions of the main parts and the limits of their permissible wear, recommended lubricants and working fluids are given.

The individual sections of the manual include the Toyota Celica operation manual, maintenance advice and electrical circuit diagrams for the car.

This service manuals will be useful to owners of cars Toyota Celica, mechanics, specialists of service stations, repair shops and car-care centers.

Toyota Celica 1988 Repair Manual – Collection of manuals for the maintenance and repair of the car Toyota Celica ST165 series in 1988.

Toyota Celica 1993 Repair Manual  – Collection of manuals for the maintenance and repair of the car Toyota Celica 200 series from 1993 onwards.

Toyota Celica 1999 Repair Manual – Collection of manuals for maintenance and repair of the car Toyota Celica 230 series from 1999 of release.

Toyota Celica 1999 Service Manual – The manual for maintenance and repair of the Toyota Celica since 1999 with petrol engines of 1.8 liters.