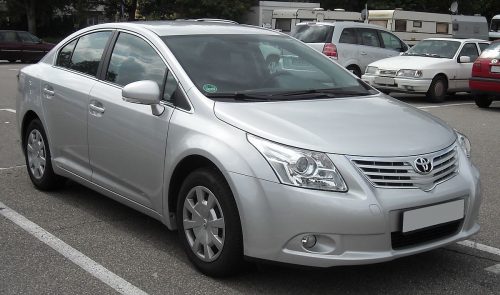 Initially, for the Toyota Avensis model, 4 engines were offered: 1.6L and 1.8L of the ZZ family, 2.0L of the D4 family with direct fuel injection, and diesel of the D-4D family of the same volume. Later, the list of available engines replenished with diesel engines of the D-CAT family, as well as a gasoline engine of the D4 family with a volume of 2.4 liters. The main idea of ​​the diesel D-CAT was to reduce harmful emissions by half, although the power and torque were similar, as in the D-4D family.

The basic is still a 1.6 liter engine with a capacity of 110 liters. It is equipped with a variable valve timing system VVT-i, which provides the engine with improved elasticity and fuel economy. The maximum speed of the car with this motor is 190 km / h, and from 0 to 100 km / h Toyota Avensis accelerates in 12 seconds. The more powerful petrol 1,8l engine develops 129hp, which allows to accelerate the car with a gross weight of 1820kg to 200 km / h.

Fans of fast driving can choose a gasoline 4-cylinder, 4-stroke engine with a displacement of 1998 cc, capacity of 147 hp. at 5700 rpm and a torque of 196N * m at 4000 rpm. Depending on the type and power of the engine, the Toyota Avensis can be equipped with both a mechanical 5-speed and an automatic 4-speed gearbox.

4-speed automatic transmission works in the tone of the engine. The transition from step to stage is smooth. With accelerations, the car perfectly obeys the pedals. At quiet driving the suspension of a car seems the most usual. She well works roughnesses, not transferring them on a body, but comfort does not amaze. But it’s worth to go a little faster, and it feels like the car behaves in bends very confidently. The list of standard equipment includes disc brakes of all wheels, EBD and ABS systems. For 2.0L versions, this list also includes the Traction Control and Brake Assist systems.

Toyota Avensis of the year looks equally well near a solid office, a chic restaurant or a family cottage. From the point of view of modern automotive fashion, the design of the novelty fully corresponds to the appearance of a family sedan of the middle class or a car of a business person.

How to remove the headlight Toyota Avensis – Regeneration headlamps – removal