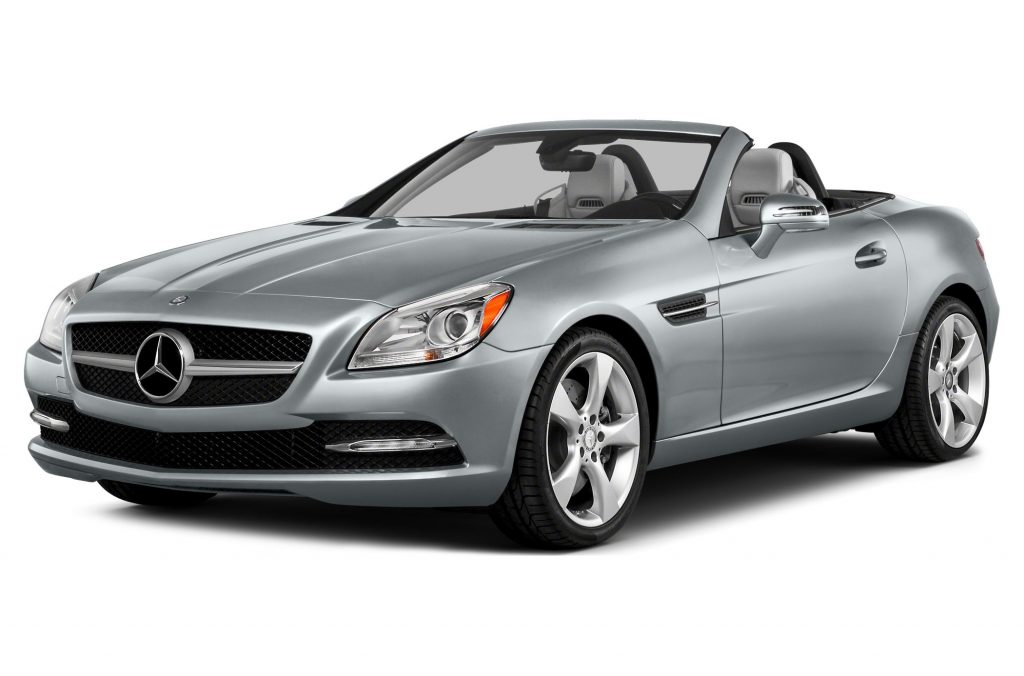 Mercedes-Benz SLK-class – a series of compact luxury roadsters of the German automobile brand Mercedes-Benz. It consists of three generations of cars: R170, debuted in the spring of 1996, R171, introduced in 2004, and R172, produced since 2011.

The first conceptual model of the series under the name SLK II was presented at the Paris Motor Show in 1994. A special feature of the novelty was a rigid folding top. The car went on sale two years later in Europe, and in 1997 hit the US market. Assembly was established in Bremen, Germany.

Later, in 2004, the second generation was presented, aimed at increasing the car’s spaciousness without changing its dimensions. In addition to the basic models, modifications from the Mercedes-AMG division, including the Black Series, were also presented. In 2008, the car underwent restyling, slightly affecting the exterior and model range of engines.

In 2011, debuted the third generation, the main feature of which was the MAGIC SKY CONTROL system – a glass roof with an adjustable degree of transparency.

At the end of 2016, after the restyling of the third generation (R172), the company decided to rename the series of cars for the Mercedes-Benz SLC-class in accordance with the revised nomenclature for marking the models of the brand. According to the new scheme, the base symbols “SL” will be used in the name of roadsters, and then follow the short designation of the class in accordance with the accepted hierarchy. Accordingly, the new “SLC” class is a compact roadster C-class.

The first representative of the series of luxury compact roadsters, the Mercedes-Benz R170, was introduced in 1996 at the Turin Motor Show. The company set a goal to compete with Porsche Boxster and BMW Z3 cars with the SLK 230 Kompressor model, equipped with a 2.3-liter supercharged engine with a capacity of 193 hp. and an automatic or manual 5-speed gearbox to choose from. A distinctive element of R170 was the flap roof (“Vario Roof”), which was controlled by a button on the center console. It consisted of a steel rigid top, divided in half along the transverse axis. Both halves are connected by a kinematic mechanism. When the button is pressed, the five-cylinder hydraulic system controls the fully automatic roof folding process, which is tightly integrated with the boot lid. With the roof folded, the useful capacity of the luggage compartment is 145 liters, otherwise the load volume increases to 348 liters.

In 1997, the company initiated the development of an update for R170. By the beginning of 1998, design work on the model restyling was completed and patented on February 2, 1998. In February 2000, the official presentation of the updated car was held, which received new front and rear bumpers, side skirts in body color and new side mirrors with repeaters. The lineup of the series was also expanded due to the inclusion of a new version of the entry level SLK 200 Kompressor and SLK 320, equipped with a new V6 engine M112 E32. Technical improvements included the addition of an electronic stability control system (ESP) and a new 6-speed manual transmission. In addition, the anti-roll bar was reinforced in the front axle and added to the rear.

In 2001, the company introduced a high-performance modification from the division Mercedes-AMG – SLK 32 AMG. The car was equipped with a 3,2-liter V6 engine with supercharged capacity of 349 hp. (260 kW). The model was to become a direct competitor to such cars as BMW M Roadster and Porsche Boxster S.

Production of the first generation of SLK-class continued until April 7, 2004. A total of 308,000 cars were produced.

In March 2004, the Mercedes-Benz company introduced the second-generation SLK-class car, which was distinguished by a dramatic change in the exterior (similar to the Mercedes-Benz McLaren SLR) and an updated roof-folding system, which, in addition to accelerating operation (22 seconds to 25) take up less space in the luggage compartment. Mercedes-Benz R171 had a number of changes compared to its predecessor: lengthened wheelbase, increased length (+72 mm) and width (+65 mm), 40% wider use of high-strength steel, a new seven-speed automatic transmission, adaptive two-stage cushions safety, side airbags and other changes. In addition, the useful load of the luggage compartment increased by 63 liters. One of the most interesting features of the new model was the system of forced warm air supply at the level of the passengers’ neck, which was called AIRSCARF. A fully galvanized body that showed a 19% improvement in static bending and a 46% improvement in torsional strength also increased its aerodynamic efficiency by 3% with a Cd value of 0.32. The lineup of the series consisted of SLK 200 Kompressor, SLK 300, SLK 350 and SLK 55 AMG.

In January 2008, the restyling version of the second-generation SLK-class debuted at the Detroit auto show, which was launched in production. Prior to this, preliminary shows were held in December 2007. Facelift R171 included new power units with improved power characteristics (SLK 200 and 350) and better fuel efficiency. External changes were limited to the modernization of the front bumper and new side mirrors.

Production of the second generation SLK-class was completed in 2011.

The development of the third generation SLK-class began in 2005. The final design was approved by the company’s board in 2008. Officially, Mercedes-Benz announced a new generation of compact roadsters in the fall of 2010, which allowed car magazines to test a disguised test car a few months before the official announcement in January 2011. The official public debut took place at the Geneva Motor Show in March 2011. The company made a rather unusual step for her, releasing several press releases in October and November 2010, which reported on the novelties of the model, in particular, the Magic Sky Control system, which allows to change the degree of transparency of the convertible top.

The car of the third-generation SLK-class, Mercedes-Benz R172, was launched in the market since the spring of 2011. Externally, the model is styled Mercedes-Benz SLS AMG. The model line starts with the base model SLK 200 with a 1.8-liter in-line engine rated at 184 hp. and ends with the SLK 350, whose performance is 306 horsepower. In addition to the factory versions, there is also a modification from the division Mercedes-AMG, introduced in 2012 – SLK 55 AMG, which is equipped with a 5.5-liter V8 engine with a capacity of 421 horsepower.

In May 2015, some changes occurred in the third generation model series. In particular, the changes touched SLK 200 and SLK 300 (replaced SLK 250). All engines comply with Euro-6 emission standards. The 9-speed automatic transmission of the 9G-Tronic has become standard on the SLK 250D and SLK 300 models (for the SLK 200 available on request), and the LED daytime running lamps are for all representatives of the series. The color scheme of the bodies widened.

In December 2015, the company Mercedes-Benz announced to the press about the renaming of the series in the SLC-class. In March 2016 it was announced that the launch date coincides with the 20th anniversary of the original SLK. In the same year, the restyling version of Mercedes-Benz R172 was introduced, which entered the new SLC class of the German brand.