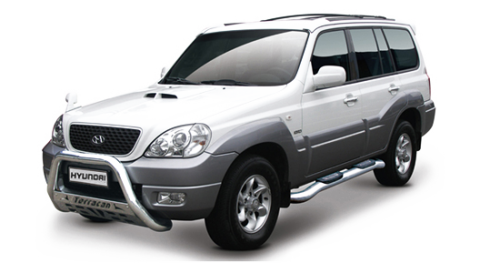 Hyundai Terracan is a full-size SUV. This car is considered the first SUV, which was completely designed and produced by the Korean company.

The car is built on the platform of Mitsubishi Pajero second generation. Produced from 2001 to 2007. Equipped with a four-cylinder diesel engine volume of 2.9 liters and 3.5 liter petrol engine V6.

The main distinguishing feature of Huyndai Terracan is the original optics. Behind, under the transparent cap, there are relief reflectors and light bulbs with special lampshades.

The car was produced in South Korea, sold in Europe, Asia, Africa and some countries in America.

The model release was preceded by the Hyundai Highland concept car.

Hyundai Terracan was presented at the Geneva Motor Show. Its predecessor was Hyundai Galloper. In mid-2004, an updated version of the car was released. Changed the appearance: the new design received front and rear bumpers, taillights and front fog lamps. The front panel has been updated.

In 2007 the car was discontinued. He was replaced by a new model – Hyundai ix55.

Hyundai Terracan was produced only with the all-wheel drive transmission Electric Shift Transfer with a rigidly connected front axle. The all-wheel drive is switched on at a speed of 80 km / h, with the torque between the axles being distributed in a ratio of 50:50. 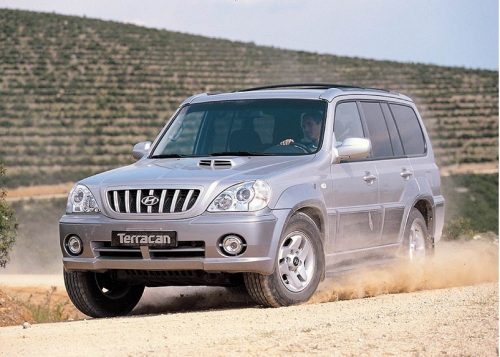 In the improved model of Terracan Highlander, the system is somewhat more complicated. There is a permanent all-wheel drive Active Torque Transfer: the front axle is automatically connected if the rear wheels slip.

The interior is made in European style. The seats inside the cabin are more than enough, the rear row of seats folds, freeing up space to carry the load. If desired, you could order an additional third row of seats.

The name Terracan does not sound very nice, but it did not prevent the popularity of the model. The name Terracan consists of two parts: “terra” is translated from Latin – earth, and the Turkish word “Khan” means king, ruler. When the car existed in the form of a concept, it had the name Hyundai Highlander. Subsequently, two versions of the name were used to designate different drive systems.

It is interesting that the manufacturer for these cars did not give an ordinary three-year, but a five-year warranty with unlimited mileage.

At the time of production, Terracan was Hyundai’s largest SUV.

One of the advantages of the Hyundai Terracan is a balanced suspension: it is stiff enough to avoid swinging on the asphalt and, at the same time, it is soft enough so that you can not brake before unevenness. Compared with the closest competitor, Kia Sorento, Terracan has the best ergonomics. The driver’s seat has five mechanical adjustments, the steering wheel is adjustable in height. The driver of high growth has more space in Terracan than in Sorento. In addition, in the model Hyundai the clutch works softer, and the gears in the five-speed “mechanics” switch more smoothly.

Among the shortcomings can be called not very good sound insulation.