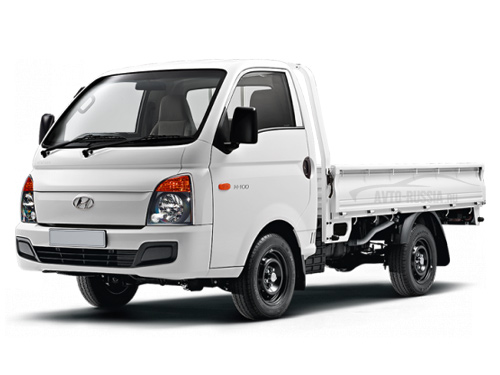 Hyundai H-100 – a minibus / van of the Korean company Hyundai of a wide range of applications (due to the variety of modifications offered by the plant). For the Asian market, the car is called Hyundai Grace.

The first generation H-100 appeared in 1987 with the acquisition by Hyundai Motor CO of Mitsubishi Motors of the license for the Mitsubishi Delica / L300. The similarity of the hybrid Hyundai Grace with the “ancestor” from Mitsubishi consists in fuel distribution equipment, belt drive of the gas distribution system with two balancing shafts, a rotating toothed belt.

Production of the second generation H-100 began in March 1993. In the period from 1996 to 2004, the Hyundai H-1 and Hyundai H-100 cars were produced simultaneously, since both enjoyed steady demand. The release lasted until 2004, when the H-100 was completely replaced by the Hyundai H-1 (in the range of modifications of the latter there was even a 15-seat version).

SWB (Standard Wheel Base) means the standard size of the wheelbase, and LWB (Long Wheel Base) – elongated. To the pluses of cargo modifications can be attributed quite a lot of cargo capacity and the volume of cargo space, wide and comfortable side doors. There are several bodies: two variants of wheelbases, short and long (appeared in 1993, the factory terminology is called TOUR), there are 9- and 12-passenger passenger van, as well as 3- and 6-seater cargo vans, the latter can be either glazed luggage compartment, or with a deaf luggage compartment. The body of Hyundai H-100 was subjected to restyling 2 times: the first time in 1993, then the car underwent significant processing, the second facelifting took place in 1996 – then the headlights, lights, mirrors and some body elements installed on the Hyundai H-100 changed.

The passenger versions of the Hyundai H-100 cars have a simple and good-quality interior, which, of course, does not reach the level of a family or a representative car, as it was created for commercial transportation of people, but it fully meets all the requirements for the car of the delivery truck. The driver’s workplace is comfortable, functional and no-nonsense. In simple, especially cargo, versions in the pursuit of the economy of the H-100 can be deprived of air conditioning and even electric windows. Passenger versions of Grace, on the contrary, are equipped, as a rule, not bad: hydraulic booster, air conditioning, electric package.

The first petrol is a four-row inline with a volume of 2.4 liters, which has 2 valves per cylinder and one camshaft, its capacity is about 110 liters. from. This engine can have a distributed injection (on all cars after 1994), or a carburetor (found on the cars of the early 90’s). The second gasoline with a volume of 2.4 liters has 2 camshafts, 16 valves and produces about 150 liters. from.

The first (D4BA) – atmospheric, with a working 2476 cm³ (2.5 liters), a capacity of 78 liters. from. – in-line four-cylinder, with an upper camshaft arrangement. The cylinder block D4BA is made of cast iron, the head of the block is made of aluminum alloy. In the block of cylinders, the “dry” sleeves are pressed. The second (D4BF) – the same engine, equipped with a turbocharger, so that its power is about 80 liters. from. The third, atmospheric diesel with a volume of 2.6 liters, its capacity is about 60 liters. from. (this engine was offered only for the domestic market of Korea). All engines installed on the Hyundai H-100 have balancing shafts.

Suspension “minimalism” in the form of a passenger front system and a simple traditional one-piece rear beam on the springs – the Hyundai H-100 for the benefit, comfort for a minivan such suspension provides quite sufficient. The front suspension is independent, with double wishbones with shock absorbers and torsion bars. The front of the Hyundai H-100 has a stabilizer bar, rear stabilizer is optional. Rear suspension – spring with one-piece bridge. Seams, joints, asphalt patches force without transmitting vibrations to the interior. Steering – Rack type, hydraulic booster is optional. The brake system is hydraulic. Front – disc, rear – drum.

Hyundai H-100 is equipped with both a mechanical 5-speed box and an automatic 4-speed (3-step + OVERDRIVE) gearbox. In the rear axle, the Hyundai H-100 can be fitted with a self-locking differential (LSD), which slips the torque from the slipping wheel to the wheel, which is more in contact with the ground (rare).

One thought on “Hyundai H-100 PDF Workshop and Repair manuals”