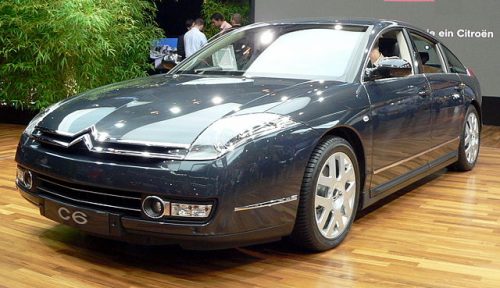 The Citroën C6 is a full-size E-Class car manufactured by the Citroën division of the PSA Group from 2005 to 2012.

Citroën in March 1999 introduced the Citroën C6 Lignage concept car at the Geneva Motor Show. The new model was designed to replace in its class Citroën XM, the release of which ceased in 2000. At the same time, the mass production of Citroën C6 began only after almost 6 years after the last XM came off the assembly line.

Citroën C6 is positioned as an alternative to cars like the BMW 5 Series and Mercedes-Benz E-Class. Despite the external similarities with the hatchback, the body of the car in form is fastback. The car is equipped with a classic luggage compartment and a unique for the modern auto concave rear window, similar to those that were installed in the Citroën CX and some models of the Dodge 60-ies.

The car’s technologies include a display on the windshield, the latest warning systems, directional xenon headlamps that rotate after the steering wheel (also available on the Citroën C4 and Citroën C5), the Hydractive 3+ adjustable electronic ride control, and a rear spoiler, which automatically adjusts speed and braking.