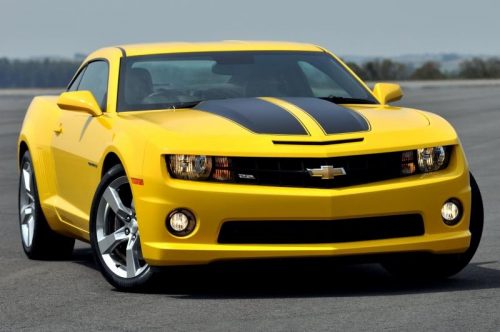 The revival of the legendary Chevrolet Camaro oil car occurred in March 2009, when the mass production of the fifth generation of a coupe was started on the GM conveyor in Oshawa. And two years later, in January 2011, the plant began assembling the Camaro Convertible – a convertible with a soft top. Due to lack of production capacities, export versions of the model appeared only in November 2011, and the car went to the Russian market in April next year.

The manufacturer has prepared a number of updates for the new model year: in the basic equipment Chevrolet Camaro 2012 is offered with a 3.6-liter petrol V6, the power of which increased to 323 hp. Coupled with a 6-speed “automatic” this engine is able to accelerate the coupe to 100 km / h in 6.5 seconds, with mechanics – for 0.5 s faster. At the same time, fuel consumption remains relatively small – according to the manufacturer, it does not exceed 7.4 liters in the mode of the route.

In turn, the charged version of the Chevrolet Camaro 2012 SS is equipped with an 8-cylinder engine, a volume of 6.2 liters and a power of 426 hp, Brembo brakes and an improved suspension. In February 2011 at the Chicago Motor Show was presented the fastest of the road modifications of the oil car – the Chevrolet Camaro ZL1 with a 6.2-liter power unit. Thanks to the use of the drive supercharger Eaton, the engine power was raised to 580 hp, and the torque – up to 670 Nm.

In addition to the power unit, the Chevrolet Camaro ZL1 2012 is equipped with a reinforced mechanical 6-speed box Tremec TR-6060 or automatic transmission HydraMatic. Another important difference from the SS version was the adaptive Magnetic Ride suspension, a high efficiency brake system designed in cooperation with Brembo engineers, and 20-inch wheels.

In the Russian dealer centers, the new Chevrolet Camaro 2012 model year is offered in the coupe and in two trim levels – 2LT and 2SS. Already in the minimum configuration, customers get a rear-view camera with a projection of the image to the salon mirror, an acoustic system from Boston Acoustics with nine speakers, as well as a full set of electric adjustments for the front seats, xenon headlights and 6 airbags.

At the end of 2013 Camaro fifth generation underwent restyling. The coupe received a new narrow radiator grille, a new front and rear optics. Slightly modified bumper and hood, supplemented with a list of additional equipment.

One thought on “Chevrolet Camaro PDF Workshop and Repair manuals”