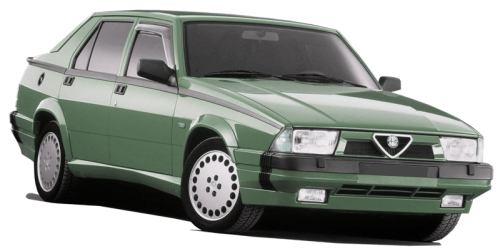 Alfa Romeo 33 (Series 905 or 907) is a compact family car manufactured by the Italian automotive company Alfa Romeo in 1983-1995. In fact, the car was a continuation of its predecessor – Alfasud. The 33rd had a common topological structure and was based on the same chassis and other mechanical parts, although it received some minor changes. Based on Nissan, the model Alfa Romeo Arna was released a little later, becoming a similar model, only at a lower price.

The 33rd took a special place in the history of Alfa Romeo. For the entire production was released about 1 million cars around the world. During his 11-year life, 33 received a small restyling in 1986 and a major renovation in 1989. 33 ceased to be produced in 1994 and was replaced by Alfa Romeo 145 and 146. These models also had opposing engines, but were already built on another platform, derived from Fiat Tipo.

Immediately known as the Alfa 33 (Series 905) – the 5-door hatchback was launched in 1983, and the version of the station wagon (immediately received the designation Giardinetta, and a little later the SportWagon was introduced next year as an all-wheel drive hatchback version.The hatchback was designed by Hermanno Cressoni at the Style Center Alfa Romeo, and the station wagon was designed by the Pininfarina studio, unlike Alfasud, a three-door version was never created.

The 33rd became famous for its agile handling and powerful opposing Boxer engines, but also became equally well known for its unreliable electronics and the tendency to rust (frequent complaint of Italian cars of that time). Another controversial point was the braking system and increased weight. The internal front disc brakes (mounted on the Alfasud near the gearbox) have been moved into place next to the wheel hubs. The rear disc brakes as on Alfasud were replaced with drum brakes.

The car was equipped with a huge amount of innovations from Alfa Romeo, including a customizable up and down steering column, plastic hood and a box for documents and things (binnacle). Stylish design contributed to the start of sales in the UK, the Daily Mail noted an aerodynamic drag coefficient of 0.36, and an impressive design for 1983, which is better compared to such large cars as Ford Sierra and Audi 100.

33 received a larger restyling at the end of 1989. Series II or ‘Nuova’ 33 (Series 907) appeared on sale in January 1990. One of the features was the redesigned interior, the installation of the injector, the new design of the transmission and the rear of the car in accordance with the new “family design” Alfa, installed on the flagship of the 164. The 1.7-liter 16-valve engine was updated, now issuing 137 hp. (101 kW). Also became available the all-wheel drive version since 1992, named Permanent 4, subsequently became to be called Q4. The latest models of the 33rd do not suffer from problems with rust in comparison with their ancestors, and their frames have been galvanized since the beginning of production 164.